Degausser by Between The Cities Are Stars 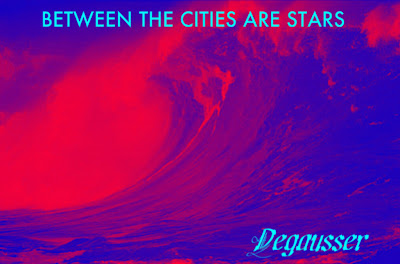 "Well How do I start this one???? These songs are the hardest yet simplest to define. Heather and I wanted to record some new riffs we had been working on. We thought of them while jamming alone in the studio, oddly enough, the four songs ended up sounding as if it was done by one person. Heather wrote Kiss and Crystals Not Clear, and I did Tabitha and Drown. It was recorded here at our house during the late night hours and nights off.

Once basic structures were formed, we began to merge vocals with fuzzed out distortion and noise. With the help of a drum machine, Heather and I decided to take to the old Dr 202 for some rhythm to make tracks to. I've always been a really big fan of underground punk, hardcore, and metal bands that don't use lots of tracking techniques and keep it very minimal. It got kind of hard with just the two of us so we played the songs for months before we recorded.

We started recording in late November and spent about 2 weeks tracking. Heather and I both work, so like most people, we had to make time rather than find it, which can actually be the hardest part. Trying to balance going to work and then putting you're self on a timeline to get a creative project done can be a difficult task. In this day in age, that is a full time job. I have a lot of respect for people that do it. We don't want the bill collectors calling us so music tends to be more of a reward for us. A way for us to make sense of life and enjoy the things that naturally feel right and its the only thing I've liked to do since I was 11, so its all I know and its something I can't quit.. I've tried.

We are both very DIY when it comes to making and creating music, the EP was done using basics. BASICS, BASICS, BASICS!! We used under 10 tracks and just had a lot of fun with the whole process. Spending time mixing. With as little production as possible to keep that old feel. Not leaning on one direction but making a concoction of sounds and ideas. Neither of us have conquered the art of mastering and after looking around awhile, we found Kramer. He also had worked with Bloody Knives which is how he first caught my attention, cause I love their sound. So we sent the mixed songs out to Kramer for mastering, who is just amazingly AWESOME! He took the songs and created a better flow and sense of completeness.

Preston with Bloody Knives was nice enough to put out our record for free on Kill Red Rocket, which worked out great since we did "Decadence" with them featuring Bloody Knives, Stellarium, Was She A Vampire, and Suicide Party. Plus, as music fans, we can also appreciate a free Ep or compilation from time to time. All in all, Degausser came out of more of a need to play music and enjoying the process.

Thanks again Renato!!!! You are a great friend with a rad blog!!