Directions To See A Ghost with The Dunes - An Interview 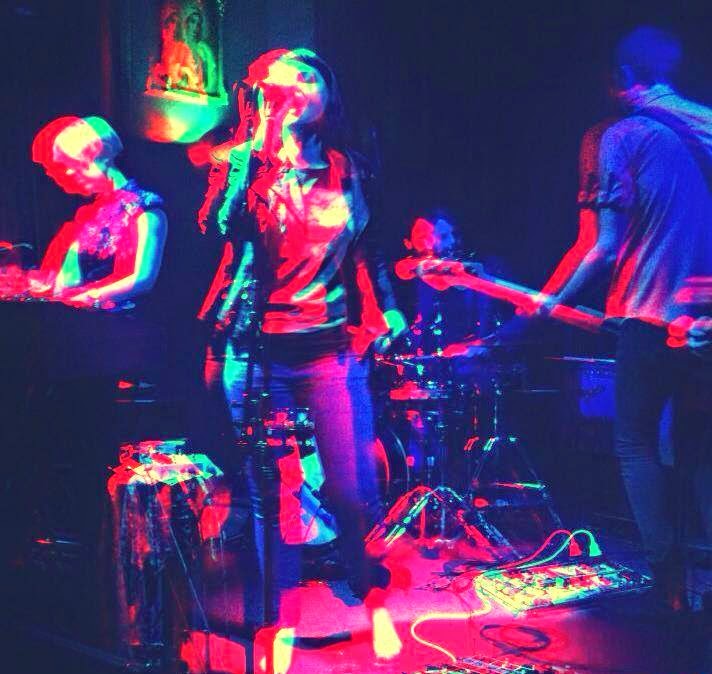 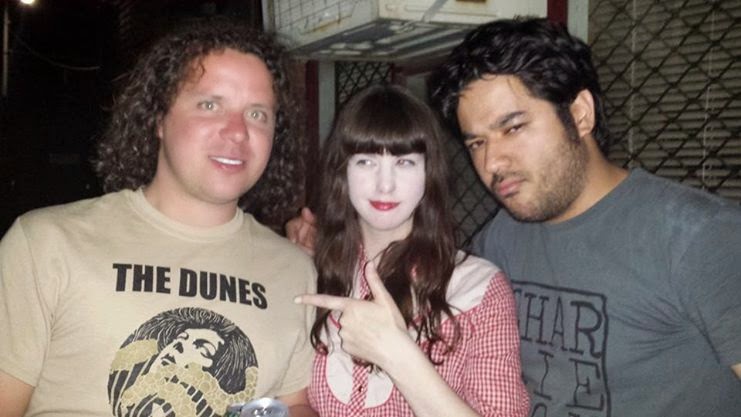 Q. When did The Dunes starts, tell us about the history...
A: The Dunes were originally concieved as a 2-piece by Matt Reiner (Guitars) and Stacie Reeves (Vox, Percussion) in 2010. Some time in mid-2011 Dan Fernie-Harper (Drums) and I (Adam Vanderwerf - Bass) were attending a show, where The Dunes were a last minute addition to the bill. We watched as the room full of people were transfixed by the lush reverb-drenched female vocals with this guy in the background strangling his guitar making the most perfect sounds. We approached them after their set and within a few month we were jamming as a 4 piece. Soon after the band hit Hillside Studios (Adelaide) and produced "Between Midnight and Dawn" in late 2012. Its interesting to note that these original songs were written by Matt as a duo, something which Dan and I respected whilst recording. The band spent most of 2013 gigging and writing, which culminated in the latest EP "La Musique Nouveau". Again, i think most of the songs were ideas that Matt had brought into practice, allowing us to build on certain guitar lines and chord progressions. For me, personally, i found this recording session really satisfying. We had more time to collaborate with the producer (Matt Hills) and flesh out the songs. Soon after we recorded, we added another person to the fold; Jessica Honeychurch on synths & organs. We have been playing solidly as a 5-piece since and its really working well.... We are in the process now of finalising some new songs which keep the element of what The Dunes were, but building on the fact that we are now a 5-piece. It gets pretty freaky in our jam space!

Q: Who are your influences?
A: The good thing about the band is that there is such a broad range of influences. At the core, we are all big fans of psychedelic music, and i do think this is reflected in our live set. We are constantly bringing new ideas and new bands into the fold (it helps that both myself and Matt DJ at various venues around town every week), as well as being out seeing bands almost every weekend. Our influences are constantly changing (whilst trying to keep "our" sound and make something new) but i think the material we are writing now has a definite Black Mountain/Wooden Shjips vibe. The Dunes have never really been a band that wrote music to please anyone... we are making music that we like and want to hear. If I was playing music that I didn't like or wasn't into then I wouldn't continue, its as simple as that. At the same time you have to have the perfect situation and have everyone in harmony - that's when ideas start to flow and the songs grow.

Q. Make a list of 5 albums of all time…
A: This one is a hard one, because i'm going to list 5 albums and then change my mind once i read it again!
The Beatles - Rubber Soul
I love how this album incorporates Folk, Rock, Pop and Soul, yet retains that "Beatles" sound. The harmonies are incredible, the band experimented with new instruments, and it all just worked perfectly to create this album that never gets boring.

The James Gang - James Gang Rides Again
Listen to the track "The Bomber" and you will never be the same again.

The Black Angels - Directions To See A Ghost
We are all massive fans of this band, and have been lucky enough to see them a number of times and also hang out with them. For me, this album is a perfect capture of what i want an album to sound like. They have that early Velvet Underground guitar vibe going on, extended jams, chant-like vocals, a percussive groove, all wrapped up in this blanket of reverb.

Vietnam - An American Dream
I've only just got into this band in the last year or so but i cant get enough of this album. I saw then at Austin Psych Fest 2013 and was hooked. Standout track for me is Kitchen Kongas.

Black Mountain - Black Mountain
I have been into this band for a long time and this particular album has been getting a lot of play at my house lately. The groove of the songs works perfectly with the psych-folk leanings.

Q. How do you feel playing live?
A. Its a feeling that cannot be described. Whether its a small room, or a big room, a sold out room or 10 of your friends, there is a feeling that comes over us; almost trancelike. Every show should be special no matter what - you're there to perform and we try to bring as much as we can to everything. Being the bass player, i like to sit up the back and really lock in with Dan (Drums). We have played together for 3+ years, quite often 4 times a week so we work well together and i know when he's going to change something up or add in a fill. Quite often we extend our songs live, we like to change things up. If at least one person walks away a changed person we are happy.

Q. How do you describe The Dunes´ sounds?
A. Dark Psych Gaze is how i'd describe it. Originally the sparse nature of the duo could be mistaken for being folksy, but at the core those first songs there were psych-folk leanings; as a 2 piece Matt had a hell of a pedal board and Stacie sang all her vocals through a Cathedral Reverb pedal. What we are doing now is taking the music into a very dark place. Quite often our music has been reviewed as being perfect for a David Lynch film. That's a compliment ill take! We are constantly experimenting with new instruments, or new songs. Recently we picked up a Drone box, which is now featuring through our live set and we plan on using it on our new recordings. I had a Korg Monotribe tucked away in my music room at home which we are using for a new song called "Badlands" (here is a little demo sampler - http://youtu.be/Yq9XdM7XyWQ), so that will feature in our live set too. 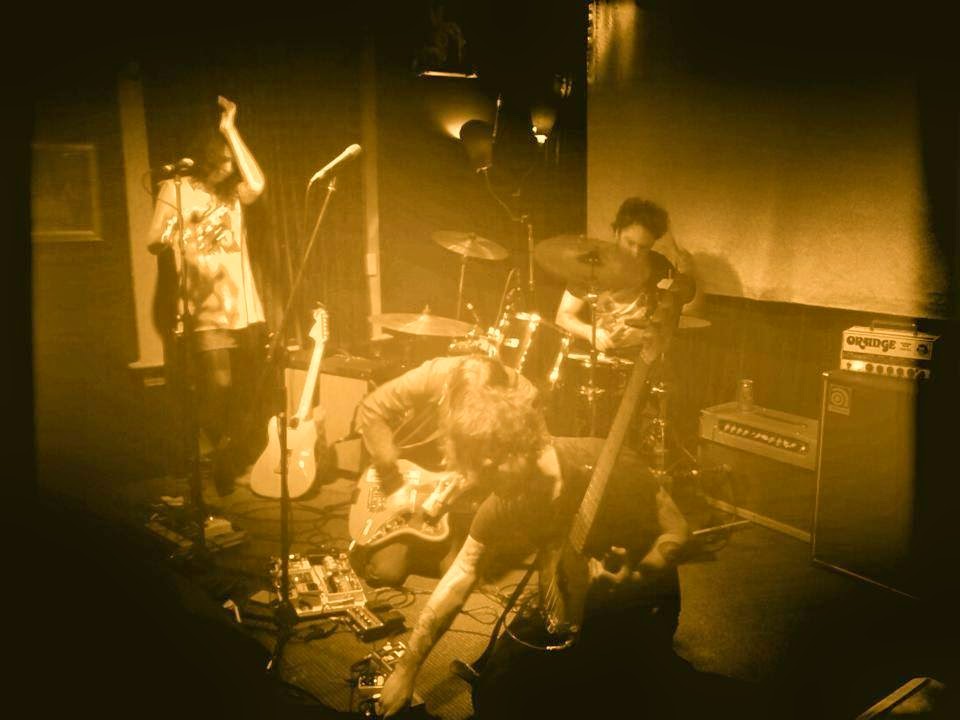 Q: Tell us about the process of recording the songs ?
A. In the beginning Matt wrote all the songs and melodies, but by the time 'La Musique Nouveau' came along we were writing more as a band. These new songs have all come from us jamming for hours at a time. We try to record what we do and ill go back over the material and pick out bits that work together. We will then go back to the jam space and work on it until it works. We are definitely a band that likes to record 'live' in the sense that what happens in that moment goes to record. Its an organic process - unlike recording one track at a time.

(note - I know that ill look at this list later and realise I have missed many more, so anyone I have forgotten... sorry!)

Q: Which bands you love to made a cover version?
A. id love to do a cover of Brian Jonestown Massacre "Hyperventilation" or The Black Angels "Drone In G Major". We did talk about learning some covers to play at our residency, but we are so into the new material we haven't had a chance as yet!

Q: What´s the plans for future....
A. We are playing a residency at The Grace Emily Hotel every friday through August. At the same time we will be heading to the studio to record some new material, that hopefully will be out a little later this year. We will take a bit of a break through September, and then look at some interstate shows in Oct/Nov, I know that we will be up in Sydney mid-December so we are looking forward to seeing some new faces up there. 2015... i have some plans brewing but at this stage i don't want to ruin the surprise :) There are a few offers around the place so we will see what this new material brings.

Q: Any parting words?
A. Go out and see live bands. Buy their records, t-shirts, anything. Most crowds wont realise the time and money put into the music they are listening to - so even someone coming up to you after a show and telling them you enjoyed it makes you know you're doing something right.
*
*
*
Thanks Adam