Emetophobia with Abdomen - An Interview 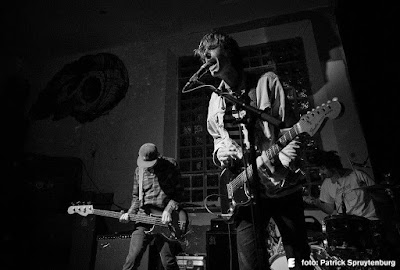 Q. When did Abdomen begin? Tell us about the history...
We started in 2015 and played some shows. In 2016 we released our first single called System.

That same year we released another single called Wrong. It was more the direction we wanted to go. In the beginning it was more simple garage-ish kind of music, but through time we developed as a band and started to create a style and sound of our own.

Q: Who are your influences?
It really depends, lately I’m really into bands like No Trend, Girl Band, Yak, METZ, The Jesus Lizard, Chad van Gaalen, So Pitted, Moaning and Die Nerven.

When we recorded the album I got really inspired by bands who also recorded there, bands like Eagulls and Bad Breeding. We got a weekend off in the first week of recording and we went to a small festival in Bradford in the 1 in 12 club. That’s where I saw Sievehead for the first time. They have had a big influence on my guitar sound.

Q. How do you feel playing live?
I don’t really know, when we play live it just feels like its over in 5 minutes.

Its fun to do but also really exhausting.

Q: Tell us about the process of recording the songs?
It went really good. We had a month to work on it so we had time to experiment with amps and all kinds of extra stuff. The first week we played all the tracks all at once, just like in the practice room. We like to play all at once so we get the live feeling into it. The weeks after that we recorded the vocals and we did a lot of re-amping. We put the dry guitar signal trough bassamps and weird pedals, stuff like that. So it’s all our live take, but with lots of extra sounds. We also recorded a lot of guitar noise and a wheelbarrow to put under the snaredrum, it sounds like a broken snaredrum. We slept in the studio for four weeks. Because of the alarms and stuff we had a small room where we would live in. We only had a water cooker and a microwave in there so we ate microwave meals and noodles for 4 weeks. Roel, our drummer, got sick after eating microwave curry after 3 weeks.

Q. Which new bands do you recommend?
The Snivellers https://gobnation.bandcamp.com/album/the-servile-worm-demo

Shit Kid, Its not new but i love her music and i think she will release new music soon!

Bad Breeding released a new EP and its great. https://badbreeding.bandcamp.com/album/abandonment

Q: Which band would you love to made a cover version of?
The Germs – We must bleed.

Q: What are your plans for the future?
Selling recordsand play shows to make enough money to record our second album