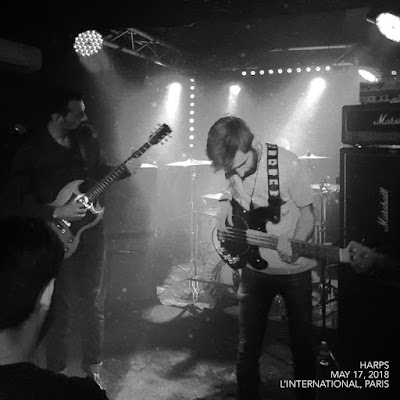 
Murmurs of Earth
Where it all begins, where the album, the concept behind it takes birth.
The first atom containing everything that is to come.
We wanted this tune to be heavy and thick, after an intro referencing some of our inspiration and layering various elements of composition, we try to paint this sort of cosmic landscape or at least our perception of it.

Who better than Sagan to greet you into that journey?

Murmurs of Earth is directly referencing the Voyager program and the famous Golden record that compiled an excerpt of some of mankind’s finest creations carried out in space, but what it really is is inviting us to an inward exploration and to question our place in this vast universe.

Spitting Acid
It’s a caustic piece with a punky tempo and aggressive playing
With this one we wanted to give the loud and slow pace of Murmurs a sort of exact opposite that would play in contrast and make the audience return to a cold, grounded reality.
It’s vaguely about a story on how the mafia treat people of their own family after they have break the omerta and at the same time it serves as a parallel with the environmental issues we are currently facing on Earth and the hypocrisy surrounding the expected solutions, hence the last chorus repeating : corrosive seas will submerge the last parcel of truth in this world, eventually.

End Feelings
Contrasts and various shades are a main focus in our writing, so again with this one we were looking for this effect, but this time within the same track length.

A two section track, and the most shoegazy we can get within the first part, with the use of clean vocals and reverb overall.

It’s kind an introspective song, about what is driving us as human beings, throughout the course of history; what really builds us as a society and what will ultimately lead us to meet our fate, both as individuals and as a species.

Hubris, jealousy, and rage, as screamed at the transition with the second instrumental part, are among our main traits, luring us into trying to achieve « great » things and therefore, should we not learn how to deal with those inclinations, we’ll be held responsible for ending all future and all hopes. And when there’s no hope left, false prophets will guide you towards a path of death, manipulating you with lies and deceptive promises. (The excerpt you hear at the end is from Heaven's Gate guru Marshall Applewhite)

Mammoth-1
We felt the album needed a break with convoluted tracks here, we wanted something more straightforward and also kind of elevated in its content, far from all form of self awareness or psyche exploration: so this track is just an hommage to a space entity that scientists have determined to be amongst the most massive and powerful in the whole universe, but with no explanation on what is fueling it.

We just hope this track reflects such an amazing power.

People
I suppose we must associate punk and noise genre with society subjects and political standpoints because this one is only doing that: observing that on this earth and in that day and age, some people and their governments are choosing to let other people die rather than offer them shelter and assistance.

As often we are more inclined to raise walls and barriers than to learn and share from other’s differences. Ther’s no judgement here, merely a sad observation.

Gaza Gazers
This one has been around for a long time.
Just like the conflict that inspired its writing has. That’s my personal favorite: it’s mean, it’s groovy and it’s loud, and all that in its own chaotic terms and structure.

This is war and it perfectly follows up the end of People and unfortunately still echoes the current status on site.

Infinity Must Have Started Somewhere
We felt the need for something epic and went for it!

We could play that one an infinite number of times and still not really grasp all its subtleties or master the various shifts it’s embedding. Just like the visible sky and what we perceives of it, this studio version is only a snap of what this piece was at the precise moment of the recording.

We can’t play it twice the same, it’s ever evolving just as our universe does.We wanted it as an ending because it comes last in the track listing but mostly as an opening to many things: the cosmos, of our inner and outter spaces, an invitation to wander in thoughts and dreams, and also an invitation to another listening of ORDERINCHAOS. An exploration of our deeper soul.
*
*
*
Thanks