Tropisms with Burnt Pixels - An Interview 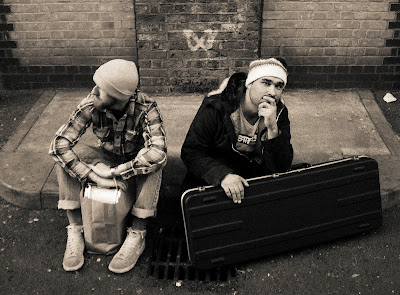 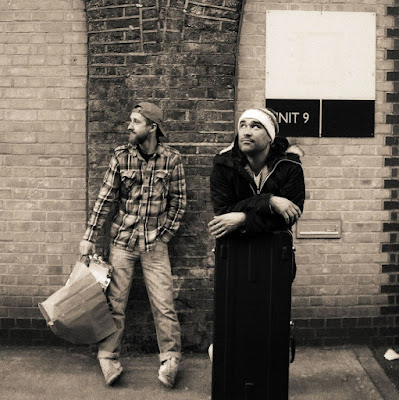 Q. When did Burnt Pixels begin? Tell us about the history...
Burnt Pixels began in the Spring of 2016. I’d been in bands with Ben for many years (23frames being the previous one), and we’ve been friends since we were about 14-years-old, but I had kind of withdrawn and had not been writing songs for a while. Ben’s encouragement to start something up again really began a fertile period for me, song-writing-wise, and just generally, artistically. I went to art school, so there’s always going to be that kind of approach to music for me. The band name was just there sitting in my head already; something new and something ancient together. I would begin recording the songs at home, almost like a demo, and then Ben would visit each week and would write and record his parts. This is the kind of recording process I really like; I’ve been recording songs on 4-tracks and other tape recorders since I was about 13-years-old.

Q: Who are your influences?
As well as all the obvious ones like The Beatles and The Beach Boys, I had my life-changing moment when I first heard Sebadoh. I think it was the honesty of Lou Barlow’s voice – the sense that he’s singing with his own voice – and the love and humour of it, too. Something about the yin & yang of a beautiful melody and the low production and noise has always appealed to me. The Cure I love massively. The melody and industriousness of Robert Smith’s guitar-playing – the unshowy majesty of it, was what really got me; and again the honesty of his voice. I was probably more influenced by The Shadows than I should admit. I love later-period Beach Boys albums, when they’re really untethered. R.E.M are probably my favourite band, silly as it is to have a favourite band. For Tropisms I bought a lot of ‘80s guitar pedals. I really wanted the guitar to sound as beautiful as possible; I made a conscious decision to be unashamed by the use of a chorus pedal.

Q. How do you feel playing live?
Simultaneously like I’m in a dream and that I’m more truly alive than ever.

Q. How do you describe Burnt Pixels´ sounds?
I want the music to sound like the artwork looks, and vice-versa. It’s like being underwater but being able to breathe and look at everything around you in detail. It’s also meant to have humour and love – music or any art simply cannot be good without those things – and not just in the lyrics but in the sound. Each album should be its own world, one that you can live in and explore and be mystified and baffled by; one in which there are both great triumphs and awful injustices.


Q: Tell us about the process of recording the songs ?
I start by recording the skeleton of the song on my laptop. Ben then listens and creates his parts, the drums, harmonies, guitar. He’s very intuitive and just knows what to do; he doesn’t make it easy for himself, either; if he thinks the song needs an 8-part harmony, he’ll record an 8-part harmony for it. We write and record the bass parts pretty much 50/50. Even the drums this time we recorded at home. I’m always writing down lyrics, sentences or phrases in a notebook that usually find their way into a song – whichever song sounds like those particular lyrics, will utilise those lyrics – unless I write a song with a clearer mission in mind, which is far rarer.

Q. Which new bands do you recommend?
I like Gnoomes - a Russian kind of proggy band. Also, I went to see the Cure this weekend in Hyde Park and supporting them were The Twilight Sad, who I’m listening to as I type – they are very good live, too. There are quite a lot of bands who, far from being new, have been around for ages but I’m only just getting into – like Slowdive (who I also saw this weekend). I’ve also seen The Rebel quite a lot this year, who is Ben Wallers of Country Teasers; I never tire of his music – it’s true punk: utterly DIY, non-partisan, non-ideological, virtually anti-everything, funny.

Q: Which band would you love to made a cover version of?
I find this an increasingly difficult thing to approach; Since every kind of post-modern or ironic take on doing a cover has been done, to the point where they’re in adverts for banks and just plain annoying, it’s hard to find a reason to cover anything – especially when you know your version can only be – at best – a pale imitation. And that’s a reason not to attempt a serious and sincere cover either. I’m sometimes tempted to cover something but then realise it’s just because I want to play it live, or wish I’d written it, so it’s probably best to leave alone for now. If I could sing well I’d probably play more covers, as often a cover is successful simply because it’s sung better, or differently. I am very gradually beginning to be able to love my singing voice, though, so who knows.

Q: What are your plans for the future?
Playing live and album #3. Burnt Pixels are now a live-playing band, which I’m very excited about and am looking forward to playing as much as possible this Summer. Ben moved to Bristol last year so I was travelling there from London to record this last album; obviously there are impracticalities to that and playing live, so now my friends Pete Whyte (bass) and Martin Wrigley (drums) have joined the band and we’re doing some live dates.

Q: Any parting words?
That sounds very final. Okay, only this: Always remember; no matter where you go, there you are.
*
*
*
Thanks