Our Three Favourite Limbs with mzii - An Interview 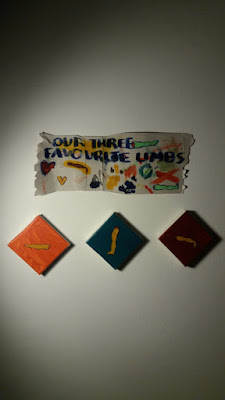 Q. When did mzii start? Tell us about the history...
mzii started sometime in 2015, I think? I'd been making music, putting it on soundcloud, but I wanted to start a brand, and the name is actually a phonetic adaptation of my first name (Maisie), which was important because I've been in a few bands, but my band members haven't been as interested as I am in performing and writing original music, so I did it all on my own.

Q: Who are your influences?
Grimes is absolutely my musical idol - she produces, writes, does the cover art for, sings, plays all the instruments for her music, and retains her core values. She's the epitome of home-grown stardom. Sum 41 is another of my influences, maybe not in the way my music sounds, but in the attitudes expressed, which are quite destructive at times. Flight Of The Conchords are a huge inspiration as well - the way they seamlessly blend humour and music is so human, and ridiculously easy to listen to.

Q. How do you feel playing live?
Honestly, it's terrifying. Haven't quite got past that yet. I do love it though, especially the original stuff, because the audience doesn't know what it's meant to sound like, so there's a kind of freedom that is completely lacking when you play a song that everyone's heard the studio version of.

Q. How do you describe mzii sounds?
Good question. In my first album (Ode to Youth) I tried to explore a few different styles (bare guitar/voice, acapella, more electronic), because I wanted to see which suited me best; and...it didn't really help. I'm still not sure *shrugs*. I think the easier question to ask would be "How does mzii feel?", which is more consistent, I think. It's meant to give a relaxed vibe that makes you think about things you normally wouldn't. The kind of feel that makes you want to dance on your own.

Q: Tell us about the process of recording the songs ?
When people ask about this, I get kinda embarrassed, because my software is so rudimentary - I use my ipad for recording, and GarageBand to arrange. Normally I come up with a vocal melody or riff, and then allocate chords or a bassline, and go from there. I know this is quite strange to some people who like to come up with the backing track first - I just think that my voice and lyrics are the most central parts of my music, and so everything else should be constructed around that.

Q. Which new bands do you recommend?
I'm digging Jacuzzi Boys at the moment, especially the harmonies and 50's aesthetic. Bleached is great too. Gotta love all-woman punk pop, right?

Q: Which band would you love to made a cover version of?
I would absolutely adore to do a cover of Can't Surf by Beach Party. Because I, like Beach Party, cannot surf. Also it's a really chill song. Oh and California Grrls by Shark?.

Q: What are your plans for the future?
I'm trying to get together some people who can help me do some experimental stuff, like more performance artsy, because that's something I'd really like to explore.

Q: Any parting words?
Art is never a waste. Make bad art, and enjoy it. Laugh about it and then make something awesome.
*
*
*
Thanks