Reverberation with The Graceful Slicks - An Interview 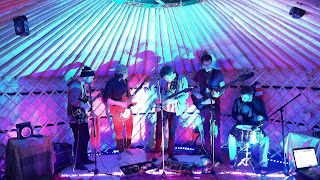 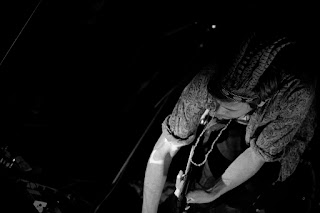 When did Graceful Slicks starts, tell us about the history...
Al and Lew were already in a local punk band which was fading out and wanted to do something more psychedelic. The rest of us were recruited online, through friends or as workmates over the past three years. We have had a few friends come and go and the odd special guest but the main lineup hasn’t changed for about a year and a half now, this has helped to define our sound.

Q: Who are your influences?
There are a lot, starting with the 60's era, mainly garage psych stuff, things like The Electric Prunes, Jefferson Airplane, The Beatles and Neil Young, then later into JAMC and My Bloody Valentine and Ride, some of the grunge from that era too Pixies and Butthole Surfers. Also contemporaries like BJM, Black Angels of course. Then people from around the world like Nusrat and Ravi Shankar. Art and film play a crucial role, artists like Dali and Alton Kelley, films like the Trip and Easy Rider, books like On the Road, Koolaid Acid Test, Catch 22, all of these things combine to the greater sphere of influences.

Q. Made a list of 5 albuns of all time…
My Bloody Valentine – Loveless
Neil Young – On the Beach
The Doors- The Doors
Lou Reed - Transformer
The Monks - Black Monk Time

Q. How do you fell playing alive?
Generally pretty drunk, hometown (Oxford, UK) gigs are rarely remembered by any of us. But it is the best time, stuff comes together when you play live and we are normally having a good time on stage.

Q. How do you describe Graceful Slicks sounds?
It is a vintage sound rooted between 60s psych and 90s indie.

Q: Tell us about the process of recording the songs?
One of us comes up with the initial concept, whether it is a riff or some lyrics it doesn’t really matter. From that point they are generally in control of the concept of the song, people add in their bits, we don’t really have a ‘you do this’ vibe, we are pretty open and all have a similar concept of the slicks sound, no one suddenly starts playing metal riffs. We take it to the studio and do it all live, put some more tracks on it then work and rework the tracks until we are happy, which takes a long time. We are our own worst critics. 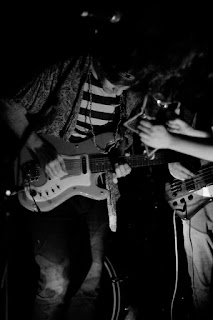 Q. Which new bands do you recommended?
We have been listening to a lot of Thee Oh Sees and Ty Segall recently. America is killing it with good music at the moment, that seems to be where all the vision and progression is in the psych genre. Each person in the band listens to different music, so its a pretty broad mix.

Q: Which bands you love to made a cover version?
We once did a cover version of Butthole Surfers - Cough Syrup, but it sounded shit, we are rubbish at playing other peoples songs, we struggle with our own…..

Q: What´s the plans for future....
New demo out in early 2013, off the back of that we are going to get signed by a massive record company, make millions, get lots of girls and drugs and make the greatest album of all time which makes all past and future music redundant. You have to aim high these days.