Cut​-​Up with Metro Verlaine - An Interview 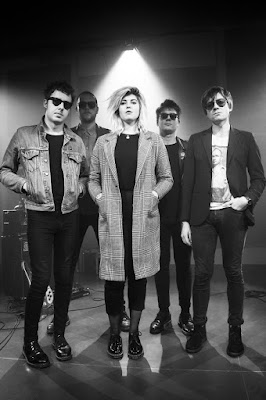 
Q. When did Metro Verlaine begin? Tell us about the history...
1 Metro Verlaine was born in 2013 after a road trip in London. I (Axel / Guitarist and songwriter ) was there to feel the heart of pop rock music and when I came back to France, I met Raphaëlle ( singer ) and we have formed the band a few weekend after. We have made a lot of wild gigs, recording demos before to find a drummer (Joe) and record our first EP Manchester with him. Few months after Romain ( basse ) has joined the band and we have recorded our first album "Cut-Up" with Charles Rowell from Crocodiles band ! And we are now on tour to play this album released on march 2018 !

Q: Who are your influences?
2 We are really big fans of post punk and English pop bands. The Cure , Joy Division , PIL … We are also influenced by indie rock band as The Kills or Velvet Underground, American literature ( Beat Generation writers ) and French Pop Music with Françoise Hardy or Daniel Darc.

Q. How do you feel playing live?
4 Our album is melancholic because we want to share special feeling to the people who listen it at their home. But on stage we want to release our fury , our energy. We think that each concert could be the last so we try to burn all our soul and body on stage …

Q. How do you describe Metro Verlaine´s sounds?
5 Our sound is really between "English" sound and French touch… Hard to describe , easier to feel it when you listen our songs… We are from Normandy and England is not so far , so maybe that’s why we are so influenced by all these fantastic bands from Albion… But we really don’t want to copy anybody or to be a cliché of a rock style ( Post punk / Cold Wave etc ) that’s why I think we’ve got a particular sound...

Q: Tell us about the process of recording the songs ?
6 We work a lot before to come in the studio to record songs. But when everything is in the box , we always want to work on it , and we try a lot of stuff to arrange it. Sometimes it’s cool and sometimes we don’t need anything else except the first tape of the song. We really love studio, it’s a creative step for a band. Really different as playing live.

Q. Which new bands do you recommend?
7 I was in London in June and I saw a fantastic band called Fontaines DC. Really raw and class ! In France we love bands as Frustration , Marietta , Liminanas or Grand Blanc. They are all very different but they are all really cool.

Q: What are your plans for the future?
9 We have released a new single "Velours Noir » with a video clip in November. We ‘ve got few gigs until the end of the winter ( Paris - Le point FMR - January 23 th ) and now are working on a new album. I hope we will have big tours next years , why not come to play shows in Brazil…
*
*
*
Thanks