A Night Like This with The Microdance - An Interview 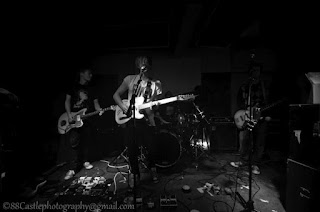 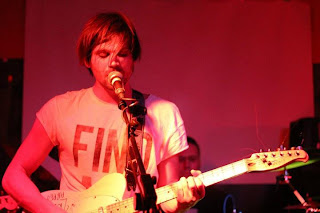 Q. When did The Microdance start, tell us about the history...
I first came out with the concept for The Microdance in 2009. I use the word 'concept' because there was no band and no means to make anything happen on the scale I wanted to at the time. The concept was to eventually have an umbrella under which I could create music with no boundaries, i.e, include everything that excites me about music as and when I wish, but to somehow keep it cohesive and natural. I had been in bands with our drummer James before and him and I have a fantastic musical understanding, so he was the obvious choice for that role. I had written the 'Her Ride To The Stars' EP to be the first under the TMD moniker and James and I went ahead and recorded it at a local studio. That EP was a real departure for me because although there are a lot of guitars, it was my first stab at something a bit more simplistic, at least as far as band music is concerned. We weren't very good at promoting ourselves, but a few of the songs got bits of Internet radio play and somehow a producer in LA called Frankie Siragusa heard them. Lucky coincidence had it that I was planning a trip to LA around that point and Frankie invited James and me into his studio 'The Lab' to record some music. So we went over there and recorded the 'Yo Yo at 26' single. Frankie and his production partner Jay Dawson are wonderful people to work with and recording those 2 songs was an amazingly edifying experience. A pretty shitty year followed for me so James and I kind of drifted - in which time I did pretty much nothing with the LA recordings. Then one day in 2010 I woke up with a renascent desire to set the world on fire with music. I put together The Microdance LE as a pre-cursor to the real deal - that was just me on guitar and vocals, a girl on synth and a female vocalist. At the same point, 'Yo Yo at 26' was starting to get some recognition and people had started to respond to my ads; so I disbanded the LE version of the band in favour of the 5 piece behemoth!


The band has been through so many line up changes since then, (James has returned to the fold, thank God) and with every incarnation, we've got that little bit closer to realising 'that' sound in my head. We recorded the 'Get Dark' EP with a band that was about 90% of the way to disbanding - Michael Triponel (our then vocalist Bridget Walsh's boyfriend) who currently plays with Darkshaft came in and tracked drums for us off the back of 2 rehearsals, Paul Grant who is a fantastic guitarist and wonderfully matched to what I wanted, was increasingly becoming less involved in the band and nobody really knew their parts. That was really odd and it's amazing that it turned out so well - I'd love to rerecord that EP with a bit more time and a more of a stable line up. Anyway, that EP (And in particular lead single 'We Are made of evil Things') got us signed to the now defunct Xd Records - an association that has introduced us to some amazing people. Only Caleb and me remain from the 'Get Dark' era. The current line-up is the perfect and very rare combination of wonderful musical chemistry and a group of people who don't want to kill each other when things get serious: 'Enemies of Love' was a pleasure to record and we are underway with our debut album which is going to be a whole new level for us, I think it will be the first time that we put something out that I'm more than 60% happy with. That's not to say I'm not immensely proud of what we have put out, but we make very ambitious music and 3 days is not enough to record 20 minutes of it without looking back regretfully and thinking 'I wish we had more time to get that synth right' or 'Shit, my voice is bad there - I could have done with another 20 minutes to get that right'!

Q: Who are your influences?
I'm inspired by so many different things when I write, sonically emotionally and aesthetically I'm constantly absorbing influences. There are probably four or five bands that I would say constitute the core influence on our overall sound but when it comes to detail, it gets really particular.

We have a five second part in a song that we're currently tracking that we call 'the Cyndi Lauper bit' because it's got that eighties chorus new wavey feel to it. When I was writing the track, I had in my mind 'this is going to be a cross between punk rock and that kind of filmic eighties pop'... I don't really like punk music but it still managed to influence me, even if it was just in the 'attitude' of the song. The great thing about this band is that everyone brings their own influence to the sound too. Gavin is a big shoegaze man and is much better at getting those sounds than me and making the songs more expansive. Everyone is kind of on the same page but has their own ideas about where a song is heading. So, influences come from all over the place - it's very organic.

Q. Made a list of 5 albums of all time…
I don't have a top five albums of all time. Music works on so many levels for me that it's impossible for me to distill all that love into five hours! I will never grow tired of those albums which inspired me to make music though; so the classic Pumpkins albums as well as others that I loved from that era - Soundgarden, Pearl Jam, Alice In Chains, The Cure - are mainstays as well as the Prince albums that I grew up with way before I picked up a guitar. Then there's all the other stuff that I love equally but sounds nothing like what TMD is doing like Aphex Twin, Bob Marley and Pantera. Here are the five that I'd say are informing my writing most at the minute but are notmy top five of all time - SORRY:

Q. How do you fell playing live?
That depends on two things: 1, the crowd - It can be frustrating when we're playing to a party crowd and they don't want to engage with the more elegiac stuff in our set.We might go 'all quiet' on you after 10 minutes and if there's a crowd who are unwilling to go on that journey, then the response is usually a bit tepid. I suppose that's something we should pay more attention to because we have enough big hitter, hit-type songs to fill a set if that's the way the night is going. And 2, how well we're playing. Although the former has a big impact on the latter. If all is good, it's the most euphoric thing is the world. If it's not, then it's close to the opposite!

Q. How do you describe The Microdance sounds?
Aural confectionery! Going deeper, I guess we try to connect with people's souls on a poetic level, it's intimate, innit! 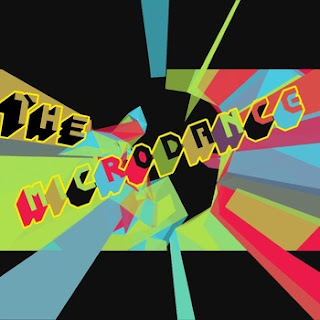 Q: Tell us about the process of recording the ep?
Enemies of Love? Lots of demoing at home followed by lots of rehearsing and then a mad rush to get it finished with limited time and money! I think there are about 17 different versions of each part from 'Goodbye Lily Laser' on my hard drive at home! Having said that, this band is great at tracking. By the time we got to the studio with the songs, we all knew our parts and tones and everyone has added something to the mix. For the first two songs, we managed to get the amazingly talented Zoe Konez to sing. She rocked up at the studio, learnt the lyrics and harmonies and tracked her lines in about an hour. The third song 'God's Joke' is a rerecording from before the inception of The Microdance; a song that will always resonate with me and that I wanted to do a bit more with. We had a bit longer for that one and it was the first work we got done in a studio that Caleb now has access to. He did a great job engineering that. Our former vocalist Bridget Walsh came in and sang, and she sounds wonderful - I guess that was her TMD swansong!

Q. What´s represents the shoegazer classic era to the band?
Shoegaze is a tough one for me because I'm not totally sure where the line is! I loved a lot of shoegaze type music when I was 10 or 11 but the tonality of the music created an emotive response in me and I had no idea that I was listening to Shoegaze. I think essentially Shoegaze for me means music that can create an emotional landscape through its sonic qualities alone; notes, lyrics and melodies certainly help, but the sound of those guitars and synths is where it starts. I love shoegaze but find it very hard to listen to a whole album, simply because I like variety - I'm to be whacked around the head by a metallic guitar after 15 minutes of looking at my trainers! Having said that, this band tries to implement the best parts of shoegaze into even its heavier stuff - that's a healthy mix! Gavin is a Shoegaze tonemonster, I call him SGG - Shoegaze Gav!

Q. Which new bands do you recommended?
I just heard a medley of bits from the new A*Star stuff, that sounds as if it's going to be stunning. All of our old label mates from Xd records are well worth checking out actually. I'm not gonna talk about new stuff that people most probably heard because those guys don't need any more help!

Q: Which bands you love to made a cover version?
I'd like 'Tango in the Night' era Fleetwood Mac to cover 'Goodbye Lily Laser'. I'd like to hear Stevie Nicks impart her gravelly goodness on that one. I'd love to hear that one synth popped up by the masters of that art too.

Q: What´s the plans for future....
Put the album out and get the level of renown and acclaim that I think we are well deserved! From there I am supremely confident we can sustain that level. I have spent way too long doing this to not stay there once I've got there. There are some songs that are being considered for the album that I wrote over 10 years ago - they are ridiculously complex, so a whole album of them would be overload, maybe we'll use one or two. In which case, there's probably enough of them for about 11 albums! This, for the first time, is the right collection of people to do those songs justice - and then some.

Q: Any parting words?
Kids, listen to albums! And tell all of your mates about the bands you love. They may appear arrogant, self-important posers but that's all a facade, they need you!
*
*
*
Thanks Alex