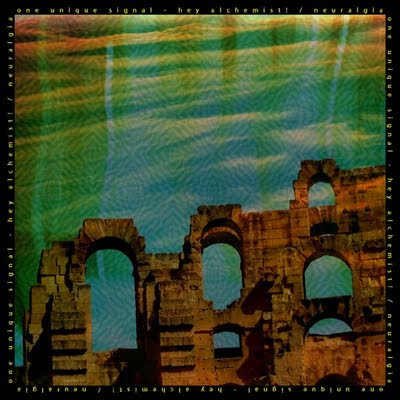 É fato que o TBTCI é fã incondicional da desconstrução sonora movida a wall of sound em decibeis altissimos que o One Unique Signal pratica, veja algumas passagens do OUS por aqui 1, 2, 3 e a entrevista, e chegou a hora do retorno do eletrochoque dos ingleses que pegam NEU!, PIL, Loop, Telescopes e adicionam querosene em estado bruto, o novissimo single Hey Alchemist / Neuralgia é puro incêndio em altas dimensões, wall of sound a niveis que poucas vezes foi-se notado e para melhor ilustrar o single, Nick Keech do OUS faz a vez no TBTCI:
Hey Alchemist / Neuralgia
Recording process:
We worked with the same people who have recorded all but one of our releases, our friends Dan Horn and Wayne Pennell. They run a superb recording space in Isleworth, west London called the Sound Bunker. It's always our first choice of studio as we have people there who understand our sound and have been with us as our music has evolved. There is an argument for seeing what kind of record we would get by using someone else. The work we did recently at Anton's (BJM) place in Berlin and with Richard Formby on the new Telescopes material offered us an insight into the way other studios work which was really interesting. The effect it had on me was to focus less on a live sounding recording and move more into a layered studio sound. It therefore seemed to make sense to stick with the people we are comfortable with and focus on taking a more active role in producing a massive sounding recording. Whilst there is a lot to be said for capturing the band live on a recording, I'm currently more into the idea of treating it as another aspect of the band. OUS don't offer any political messages, nor do we expect to change anyone's life with our lyrics and so the way I see it there are three main areas left for us to get our vibe across: Live sound, recorded sound and our artwork. Previously we have tried to make our recordings sound similar to our live performances but it struck me as a wasted opportunity. It's a real chance to build a beast and enjoy a creative experience that isn't doable in a live setup. The two tracks on the new record, Neuralgia especially, have plenty going on in there. It's great headphone music! We have only scratched the surface and I'm really looking forward to getting better at constructing our sound in the studio.

The influence:
This record is just two songs, side A 'Alchemist' that came out of a demo written by Byron and side B 'Neuralgia' from a demo of mine. I can't speak for Byron's initial influence when writing but it's fair to say that a large part of it came out of a mutual love of minimal chord progressions and repetition. The whole band sing from the same hymn sheet when it comes to sound, and any one of us bringing a demo into the practice room can be sure that the band will evolve it in a way that compliments the initial idea. My track Neuralgia was born out of an ongoing desire to take the repetition gospel and run with it. It's pretty obvious where my influences come from and all I'm trying to do is express my interpretation of the music I love. I'm at home immersed in volume coupled with a riff that is repeatedly droning on, suspending you in it's vibration. Two minutes of the same riff is boring...Five minutes and it starts to come alive...seven minutes plus and it begins to become your world! At this point you can drop in a single note through a wah pedal and it turns the music on it's head. The simplest addition can be epic.

New album:
We actually recorded four songs when doing this single. The remaining two will be held back for possible inclusion in the new album but this is a way off at the moment. Maybe if the single does well enough we'll have a good argument to take to the label and ask for another release We have an idea (in the very early stages at the moment) to self record and release a collection of mellow stuff. Dan, Jim and Mess are especially good at this sort of stuff and have a large collection of songs already waiting in the wings. Byron and me also have a bunch of ideas and so it seems like a possibility. There is also a new Telescopes record due in the not too distant future which is Stephen Lawrie and us.
*
*
*
Thanks Nick
http://itunes.apple.com/gb/album/hey-alchemist!-neuralgia-single/id462795740
Postado por TBTCI às 07:31