Where Nobody Can Hear You Scream with Masquerade - An Interview 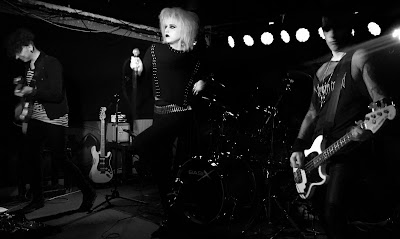 
Q. When did Masquerade begin? Tell us about the history...
Masquerade began in late 2012, when we acquired our first solid lineup. In 2013 we played our first shows in Finland and Sweden, and had a national TV appearance, also our debut EP and music video came out that year. To date, we've released two EPs and two albums, six music videos, and performed in the U.S.A., Japan, Mexico, Russia, and all around Europe, as well as at Wave Gotik Treffen festival.

Q. Make a list of 5 albums of all time…
These are in no particular order...
"13.13" from Lydia Lunch,
"Juju" from Siouxsie and the Banshees,
"Cut" from the Slits,
"Fetisch" from X-Mal Deutschland,
and "Fairytales of Slavery" by Miranda Sex Garden. Those are some of my personal favorites.

Q. How do you feel playing live?
In my element. I can unleash my savage, uninhibited passions - some people might think it's all just a show but that is my real self there, doing what I love. I have now, in 2019, performed in bands for a whole decade, and can't get enough of it.

Q. How do you describe Masquerade's sounds?
Tribal drums, a dissonant, screeching guitar, a growling bass, and theatrical vocals. A reviewer has recently described it as intense, and I think he was onto something there. It's more traditional, expressive post-punk than the toned down version of it that most contemporary bands deliver.

Q: Tell us about the process of recording the songs?
We record all the instruments except vocals at a studio, my own part I record myself. Then we pre-mix it, and I do the final mix at home, Jacques mastering it. It's often a drawn-out process, we like to take our time. The previous album, "Where Nobody Can Hear You Scream" (released in November 2018) was sometimes such a torment to finish that I wanted to have an exorcism performed on it! But having complete control and all the reins in our hands is the only way to go for us, even if it means having a bit of a struggle, and I guess it adds to the intensity and tension of the end result.

Q. Which new bands do you recommend?
There's a very recent band from Finland called Agnosia, I'd advise you to check them out!

Q: Which band would you love to make a cover version of?
We actually performed our first ever cover song last summer in Japan, it was "The Man Who Sold the World" from David Bowie. Perhaps we will add more of those to our repertoire, who knows...

Q: What are your plans for the future?
Coming to Brazil, of course! In late June and early July we'll be having shows in Rio de Janeiro, São Paulo, and Decadance Festival that'll take place in Araras (São Paulo region). The details will be soon revealed on our website and Facebook.

Q: Any parting words?
We're very much looking forward to visit your country! We've heard that there is a huge following of goth and punk in Brazil, as well as many fans of ours, so we decided we have to play there. Vejo todos vocês em breve!
*
*
*
Thanks