Break My Doubts with Enemy of Soviets - An Interview 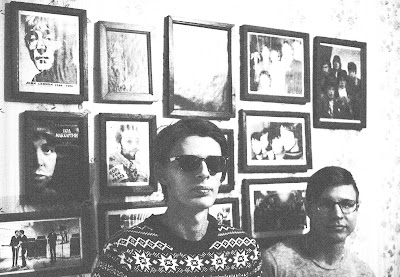 
Q: When did Enemy of Soviets begin? Tell us about the history...
We decided to create a band back in 2012. And it happened because all my life I was sure that I have to write and play music, otherwise it just cannot be. I convinced my friend that we have to create a band! At first we were called The Steering Wheel and played in different styles, tried what suits us better. Played different - from blues to punk. As a result, we understand that post-punk suits us perfectly. This music was perfect for expressing our feelings and thoughts. In 2016, we released an EP, and after a while we renamed ourselves Enemy of Soviets, started working on our first album, which you can now hear.

Q: Who are your influences?
It's hard to say what kind of music influenced us the most, we admire many musicians. But if think about it, we choose Interpol.

Q. How do you feel playing live?
We have not played for a long time. Since we work in a regular job, we didn't have time to perform during the recording of the album! In any case, it's cool to perform, especially if the audience is suitable.

Q. How do you describe Enemy of Soviets sounds?
Dirty, congested, "tape" sound, but without fanaticism, all should be balance. On our album Break my doubts we tried to reflect that. In a sense, we are tired of listening to the sleek, plastic sounds of many other contemporary bands. I think we wanted our sound to be more alive and we did it.

Q: Tell us about the process of recording the songs ?
We really wanted all our songs to sound as sincere as possible. And so it is, we gave our best. Sometimes, to sing sincerely, you need to relive all these feelings, about which are written songs. And, yes, sometimes I'd get myself into terrible mental condition. Not having a lot of money for studio recording, mixing and mastering-engineers, we did everything ourselves. We went through many difficulties, constantly moved from place to place. We have our own recording equipment, so we can safely say that we have our own mobile studio. I also want to say thank you to our friend Vitaly, some parts were recorded in his studio.

Q. Which new bands do you recommend?
Mere Women from Australia. That sounds awesome! Lea Porcelain - they have a great future.

Q: Which band would you love to made a cover version of?
We don't really like covers, but it would be cool to try a post-punk cover on The Beatles!

Q: What are your plans for the future?
We really want to perform and work on new songs. Maybe in the spring you will hear our new songs. We would like to perform in different countries! Now we have a third member in the band, we are rehearsing and will soon be performing in support of our album. So far, alas, only in Russia.

Q: Any parting words?
Never give up and listen to damn good music! Thanks!
*
*
*
Thanks