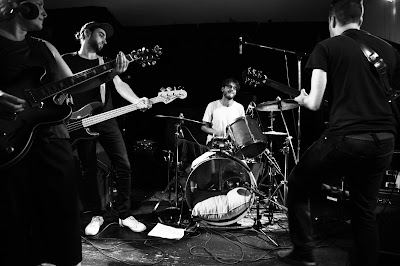 
Q. When did Murmure begin? Tell us about the history...
Well our first songs were written early 2000s. They were very basic acoustic demos... We put them on the shelf for a while and ventured to others things. I had a number of bands after that. So my energy were mostly for those other musical projects. It was not until 2013 that we committed to Murmure. We dug up these old acoustic demos and reworked them, but this time they were more piano/ambient driven with slow tempo, atmospheric guitars drowned in reverb. Since then our songs became more guitar focused with a lot more distortion. Our influences naturally resurfaced with time.

Q: Who are your influences?
We have so many influences, it's very difficult to pin point them all. I guess it depends on the song too. I remember writing "L'imaginaire #6 (La résignation)" and thinking... this riff reminds me of an old Smashing Pumpkins song (Gish area)...But basically influences comes from everywhere, Sonic Youth, My Bloody Valentine, Eric's Trip, Cocteau Twins, Crackerbash, Cavein...

Q. Make a list of 5 albums of all time…
This is a very difficult question to answer... It changes constantly. I won't name Joy Division, My Bloody Valentine, Jesus and the Mary Chains because its pretty obvious right?! We all know they did amazing groundbreaking albums.

Q. How do you feel playing live?
We love playing live!! We would love to do more gigs in 2019.

Q. How do you describe Murmure´s sounds?
I guess in a few words... Layered, textured and lots of reverb and delay... All that in French.

Q: Tell us about the process of recording the songs ?
It usually starts with a drum groove I hear in my head... After that its guitars, guitars, bass and more guitars... So many different guitar tones are stack on top of each other.. I don't do the "reamping technic" though. (Reamping is using a recorded DI signal to send through different amps)
For example, I'll play each guitar tracks separately. I find it really makes a big different for what we do. It thickens the guitars.  For vocals, we usually do 3 tracks for the lead and pan them with one main centered with a good amount of compression and reverb.

I try to find the right sound for every song (sonically)... When I'm close to something interesting.. Rachel's going to lay down some basic vocal tracks (guides) for the verses and choruses. After that, I start producing and arranging the song... finding an interesting direction... When I'm completely done.. We redo basically everything from scratch with the right equipment...

Q. Which new bands do you recommend?
It's difficult to keep up with new bands... They keep popping out every day... But here in Montreal we have tons of awesome bands... Recently i've been really into Bleu Nuit, Heathers, Victime, Corridor, Calomine, The City Gates. Some of my favorite release this year have been from The City Gates (CA), Jet Black (CA), Bleu Nuit (CA), Slow Crush (UK), Nothing (US).

Q: Which band would you love to made a cover version of?
We are currently working on a The Nightblooms cover. So maybe a cover from Cocteau Twins would be fun.

Q: What are your plans for the future?
Early next year we will be releasing a new EP, a few songs have been written which 2 are almost done. Like I said, we're also working on a Nightblooms cover for a different project which will be soon available.

Q: Any parting words?
Don't stop supporting your local bands, go see them live, buy their merch, share them on your social medias, help them on spreading the words. It makes a huge difference!!! Cheers
*
*
*
Thanks