Empires of Shame with Frustration - An Interview 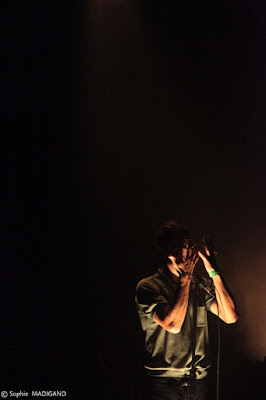 
Q. When did Frustration begin? Tell us about the history...
The band started end of 2002. We already knew each other from a long time as we were all playing in several bands forming what we called The Happy Family at these times. Fabrice, the singer, wanted to start a post-punk cold wave band, influenced by all those english bands he loved when he was a teenager. It didn’t take long to find a guitarist, Nicus, a bass player, Manu, and a drummer, Mark. Fred came after a few rehearsals with his keyboards. Fabrice also found the name for the band while listening to the Crisis’ frustration song. Frustration has now a new bass player, Pat, and we are still five friends playing music together.

Q: Who are your influences?
Crisis of course. But also Warsaw and Joy Division, and Wire and Killing Joke. But also Death in June. And Eddy Current Suppression Ring. And we’ll certainly forget some. We could say Post-proto/arty/synth/street punk but not only. And we listen to a wide range of music from mambo to dark electro via rockabilly and krautrock.

Q. How do you feel playing live?
Sweaty and fucked up,after! Playing live is the quintessence of Frustration, it’s where it all came from. We deliver it raw with a lot of primal energy.

Q. How do you describe Fustration´s sounds?
Organic and pleasurable (we hope so !). It’s a mix between the post-punk Manchester like guitar sound and actual electronic music. It’s far beyond punk with its roots in it.

Q: Tell us about the process of recording the songs ?
Until then, we used to play the songs a lot live before recording them. When we thought we were ready (actually when we had enough for a LP), we booked a studio and then recorded the thing in 7 days. We recorded « live » except for some overdubbing and the vocals. For the next album, we worked in a more conventional way. We worked on the songs during rehearsals and then recorded them « live ». But this time, we still worked and changed a few things after while. We’ll see if it was the good recipe.

Q: Which new bands do you recommend?
Each and every band from the new australian scene (Total control, Constant montgrel, Uv races,etc…), Crack cloud, Minneapolis Uranium Club and Beak (but is it still a new band).

Q: Which band would you love to made a cover version of ?
Yours! Ahaha ! Covering is a difficult thing, there are plenty of songs we love that we are not able to cover. For example, we love Futureworld from the A Frames. We tried to make a cover of it but it didn’t work. But we made some good shit too, like Holocaust or Electric Heat from the Visitors.

Q: What are your plans for the future?
A new single (with our cover of Electric Heat) released in february 2019 and a new album for this fall… And touring in Brazil of course !