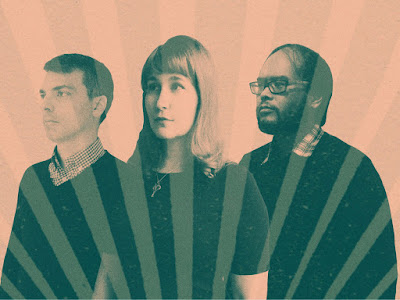 
VV
HC: The narrative of the song follows a protagonist whose minor youthful transgression ironically affords the freedom to flee atrocities in his homeland, and seek redress abroad as a stateless refugee. We attempted to give the listener a sense of displacement by throwing all these different time signatures at the song: starting out in the familiar 4/4, moving onto 6/8, 5/4, almost free time, and then to back 6/8.

AB: Some listeners may recognize this character from our song, Pictures From Home, which we released as a digital single last year for the Bandcamp ACLU fundraiser. The first half of VV occurs before the Pictures From Home story, the second half afterwards.

Julia's CallAB: Probably my favorite tune on the album as it was the only track I could persuade Hewson to sing on. The character of Julia made a strong impression on me - so much that she also informed the lyrics of One Of Your Own, The Cross Of Lorraine and Westway. I imagine her as a girl of about sixteen, a sort of hybrid composite of Sydney Bristow from Alias and Girl Eleven from Stranger Things. She has, for want of a better word - abilities. She's been raised in isolation from greater society, in the understanding that she was to serve a noble purpose. But as she matures and the outside world creeps in, she discovers that she's been deceived. She is, in fact, a weapon - a tool of an oppressive and violent regime. This realisation shatters her. She defects. She wants to disappear, begin a new anonymous life somewhere, be a normal girl - but she's compelled toward engagement. It's a fight or flight moment. She chooses to fight.

HC: When George Mattson built my modular synth, he made the foolish decision to trust me to select and wire in an appropriate power supply. Somehow, after I clumsily did so, I found that the synth was prone to minute voltage fluctuations that would find their way into the tuning of the oscillators. Anything from LEDs lighting, gates opening or envelopes firing would find their way into the pitch CV. We found a way around it, but most of the time I prefer the sort of organic, mournful tuning that results - and I feel like you can just slightly hear that in the synth melody that weaves in and out of this song.

One Of Your Own
AB: This song is set in a forest at sunset - Julia has fled her compound, and her handler is attempting to locate her via psychic means. He cannot - she is gone. There is nothing but the trees and the encroaching darkness. He is alone. He feels rage and betrayal at what she has done - at what she will do. Too cowardly to return without her, he kills time in the woods - chain smoking to keep warm as the temperature drops and the long night sets in.

The Cross Of Lorraine
AB: Julia has become an agent of the resistance, and is tasked with committing an act of violence against someone formerly very close to her, someone from her childhood. Her act will save the lives of many, only she can do it, but even so - she struggles. I hear the repetitive chorus in this song as both her orders and her internal monologue. She has to keep telling herself this. The verses are a journey by night, we follow her as she spirals inward - from the outskirts of her former village, into the empty streets, the exterior of her childhood home, right up to the threshold of the door - then darkness. Does she go through with it? We will never know.

HC: I have a friend who attended a military-style academy for university, and he occasionally has to go back to take classes for his accreditation. As he draws closer to the campus, the site of all of these old traumas endured, he gets more and more physically ill - heart racing and stomach turning. I thought of him forcing himself to return to this dreaded place, and found that the relentless progression of the song - combined with the distorted melody that persists throughout - reflected that.

Radiant City
HC: At the University of Chicago, there was a band called Toulouse who released this album, "New Points New Lines". All these songs about urban planning. I was totally obsessed with them - going so far as to start a project called The New Lines. Anyway, the guitarist, Jamison Duffield, had this really strummy Josef K crossed with ESG sort of sound - playing a neck pickup only Gretsch Rambler. I had always wanted to try a nod in that direction, both the sound and the subject matter. I was super thrilled when it turned out that Allison and Matt were fellow nerds up for creating a song inspired by Le Corbusier!

AB: Yes, the title is of course from Le Corbusier's blueprint of social reform, Ville Radieuse. In the song, an unnamed architect - trapped in an ugly dystopia of bloated, gilded excess - dreams of building a more just, beautiful and sustainable world.

AB: I think the lyrics and vocal melody date back 10 years or so. I remember writing this after watching a BBC nature documentary narrated by David Attenborough - I think it was from the Planet Earth series? It features this wonderful clip of a male Bird of Paradise building his display area and performing his courtship ritual. But in the post-script "behind the scenes" segment, it's revealed that in order to obtain this footage, two ornithologist filmmakers had to stake their elusive target out for well over a month. They slowly went mad in the rainforest of New Guinea, isolated in their bird hide, peering through the lens in long, tiring shifts, day in, day out. Such patience.

Audubon, the painter and naturalist, worked differently of course. He shot his birds not with a camera but with a rifle, then shaped them into lifelike poses with wire. He had to paint them fairly quickly, before they decomposed in the southern heat. To me, Hewson's intense arrangement and Matt's insistent drumming conjures real feelings of dread and panic - bringing to mind images of drone warfare, which lends a sinister dimension to the title.

HC: In our early discussions I was struck by this idea of trying to preserve beauty through death. The hunting of birds to collect and catalog their corpses. The grief-stricken mourner who tries to cope with loss by hanging onto the corpse of their beloved - desperately fighting off decay. It's a theme we've visited before in one of our earlier songs, "Through the Lychgates". 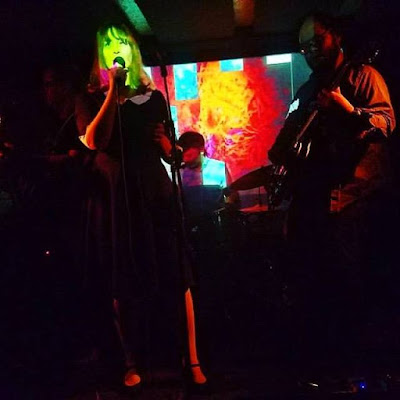 Under The Waning MoonAB: A surreal, dream-like song in which the real monster is not at all who it might, outwardly, appear to be.

HC: Generally, the song relates to how people can feel horribly threatened by the realization of their deepest ideals or fantasies. How people might experience a kind of shadenfreude from hearing about pop-idols meeting with misfortune or despair. Do people enjoy those stories, in part, because they feel threatened by the celebrity in some way? Is it a distancing mechanism? Many people who aren't threatened by a commodified figurine of Ardhanarishvara at a home decor store still can't handle the idea of a trans person using the bathroom of their choice.

AB: The waning moon is a revelator, a truth-teller.

Walter And The Taxi
HC: We had this narrative about the late philosopher Walter Benjamin sensing the fascistic walls closing in on him, and weighing his options. We wanted to give it a sort of Western high-noon vibe. Tension before the showdown: that sense of a fateful event coming down the pike. Making everyone pull the curtains, batten down the hatches, and walk stiffly and hurriedly on the street. I had been watching a lot of Westworld during the making of this song, ergo this sort of weird spaghetti-western-crossed-with-synth-arpeggio thing.

AB: Probably the saddest tune on the album, in spite of its jaunty, swingy 5/4 meter. Just in that it's about a genuine, human tragedy - rather than a character of our own invention. I hope we did right by him and his memory.

White Wall
HC: The idea here - in broad strokes - was to start with something small, airy and fragile sounding, then expand it into something stark, concrete and electronic. To relate that sort of strange clarity that happens after a catastrophic occurrence - like you get into an accident and suddenly time slows and every minute detail is getting seared into your memory…

AB: It's inspired by the opening chapter of The Goldfinch by Donna Tartt. Keeps with our avian theme.

Westway
AB: The car crash / motorway motif is inspired by J.G. Ballard's Concrete Island - but re-imagined as the setting for another chapter in Julia's story. It's a violent ending, but hopeful. The song's narrator is an older woman, a decoy, who values Julia's life above her own. She is preparing to sacrifice herself, so that Julia may escape her pursuers and attain freedom. There is a protective, maternal instinct running through her decision. She never wavers.

The liminal areas below the Westway are very haunted places. My friend, the author David Southwell (creator of Hookland and Actual Entity cover photographer), lived for many years in Little Venice, west London. He has photographed the strange, brutalist geometry of the Westway extensively - and it was while looking at his work that I was inspired to set a song there. He used to tell me stories of disappeared gangsters buried within its concrete pylons. I challenge anyone to walk underneath it and not feel intensely disturbed.
*
*
*
Thanks