Kill Surf City with The Vandelles - An Interview 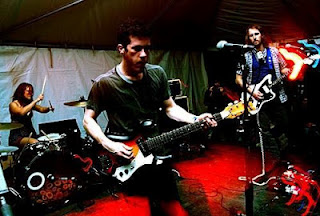 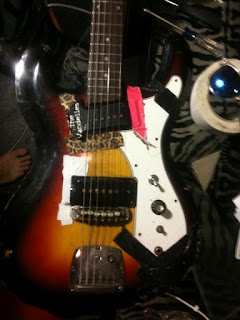 Q. When did Vandelles starts, tell us about the history...
That depends how far back you want to go, in high-school I started getting the feel for a concept band that would try to make rock music to go along with 40's noir movies. I wrote about half the songs for Del Black Aloha including Lovely Weather and Fever of the Beat during that time. There were a couple of incarnations of the group under different names, but in college I met a friend who joined and helped me solidify to the concept and the name. Since then we've had two guitar players and two bass players releasing an album and two eps. Now we're a three piece and our sound has developed into a mash of marychain beach boys ramones pixies etc surf influenced pop rock and roll. We just released the album Strange Girls Don't Cry and soon there will be another album and ep.

Q: Who are your influences?
Obviously we love the jesus and mary chain. When I first heard psychocandy in high school I had been writing a lot already but the way they used feedback as an instrument really changed my approach to putting parts together in the recording process. Also the Brian Jonestown Massacre, Anton paved the way for what I think is good music to come back into the club and internet-sphere. In the early 2000's I was talking to Bomb Records a bunch through emails and thats how I came across BJM. After that I started looking for other bands around the country which eventually led to us going to austin a bunch and california to play with bands we'd met online. Now its become a huge world-wide network of psych bands through the internet which is really awesome.

Q. Made a list of 5 albuns of all time…
Chronological order (and this is my list for the vandelles influences, I know for a fact the girls would disagree with a couple of my choices, and I'm not including the Beach Boys because everything before Wild Honey is awesome, or Dick Dale because he invented "surf music", or the Pixies because everything frank black has done has influenced my writing style)

Davie Allan Apache '65
The Beatles Magical Mystery Tour (the first album I listened to on repeat for a year before discovering jimi hendrix, the beatles changed how music was and is recorded forever)
The Ramones Ramones (possibly the best album of all time, if not for the sex pistols shenanigans this album would've been number 1 on all the charts in my opinion)
Jesus and Mary Chain Psychocandy
Nirvana - In Utero (God I love this album and it has had a huge influence on my use of layered distortion)

Q. How do you fell playing alive?
If you mean how do we feel playing live onstage, I love it. Since becoming a three piece I've been able to build out my live setup with more amps and pedals which I've always wanted to do and I am LOVING.

Q. How do you describe Vandelles´ sounds?
The new record is a bit night and day; about half of the songs are surf-pop tunes, while the others are darker psych style songs. I think the overall mood of the album has this kind of mystery of the ocean feel to it, like standing on the beach looking far out onto the horizon and seeing a storm out in the distance 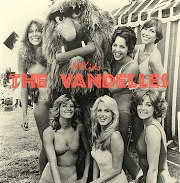 Q: Tell us about the process of recording the new album?
Strange Girls was recorded at RAD Studios in Bushwick Brooklyn. Spring 2011 we had just released the summer fling ep and we really wanted to get a new album out so after we got back from sxsw we started rehearsing the new songs heavily and booked time at RAD through some of Christo's friends. We knew a couple great bands had recorded there like Twin Shadow and Hooray for Earth had made records there. Josh Ascalon Engineered, we did a week of sessions in June and then another three days in september to finish everything after our midwest tour. The songs were all tracked drums bass and one guitar together and everything else was overdubbed. RAD has some awesome outboard gear - we took advantage of their analog distortion a lot all over the album. After everything was done we were very very lucky to have the opportunity to have Joel Kass master the album, which took the whole sound to another level, when he was done everything just sparkled in this super-classic way.

Q. What´s represents the shoegazer classic era to the band?
Everyone knows my bloody valentine invented the "shoegaze" sound but the mary chain are my favorite creation records band.

Q. Which new bands do you recommended?
ringo deathstarr, the black angels, the vacant lots, night beats, crocodiles, dum dum girls, bleached, cool serbia, diiv, total slacker, los robertas, I could go on and on actually there is so much good music happening everywhere right now all you have to do is get into the scene and start looking around. 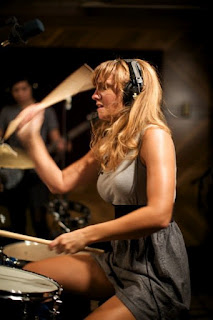 Q: Which bands you love to made a cover version?
We've done several covers in the past like spacemen 3's loosing touch with my mind and the cramps' aloha from hell, which are both available on our bandcamp for free download. We also used to cover bjm's not if you were the last dandy on earth and soon we'll be putting out the beach boys' surfin' usa as a free download.

Q: What´s the plans for future....
We are in the process of recording the next album and ep to be released as soon as they're done.

Q: Any parting words?
Be yourself everyday, unless you can be a unicorn then be a unicorn everyday.
*
*
*
Thanks Jasno!!!
https://www.facebook.com/pages/The-Vandelles/
http://thevandelles.bandcamp.com/
Postado por TBTCI às 07:02