Glossed with Rose Sèlavy - An Interview 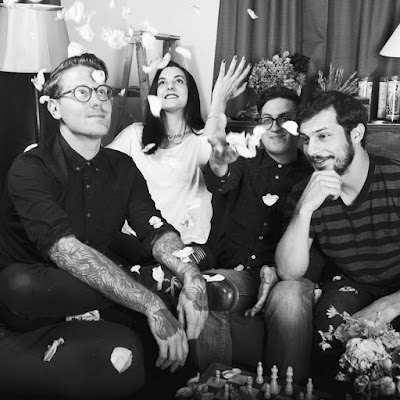 Q: Who are your influences?
2.) We are heavily influenced by 80's pop music and 90's shoegaze.

Q. Make a list of 5 albuns of all time…
3.) Ride - Nowhere
The Cure - Head on the Door
The Smiths - The Queen is Dead
Nirvana - In Utero
My Bloody Valentine - Loveless

Q. How do you feel playing live?
4.) Performing live is equal parts satisfying and stressful.

Q. How do you describe Rose Sèlavy sounds?
5.) Ultimately, we think of ourselves as an indie pop band. Even though one side of our music is very jangly and clean and the other side is heavy and washed out, it's all pop music to us.

Q: Tell us about the process of recording the songs ?
6.) We are currently working on our first full length record with our good friend at Estuary Studios here in Austin, TX. Usually the songs start as rough acoustic sketches which we then take apart to find a few different melodies. In the studio, Art knocks out his drum parts really easily and then Robert and Steven meticulously work on guitar and vocals. The process is usually pretty organic.


Q. Which new bands do you recommend?
7.) Lately, we have been really into The Spook School, Wildhoney, Summer Salt, Cloak Room, and Young Girls.

Q: Which band would you love to made a cover version of?
8.) Actually, we have worked on a lot of covers in our short tenure as a band. Currently in our set is a cover of "I Wanna be Adored" - The Stone Roses and "In Between Days" - The Cure.

Q: What are your plans for the future?
9.) There are some really cool things planned for the future. We are tirelessly working on the full length and we are hoping it will be out by mid/late summer. After that we are planning an east coast tour in the fall. We will also be working on curating ATX Popfest which is an event we started with our really good friends at Austin Town Hall.