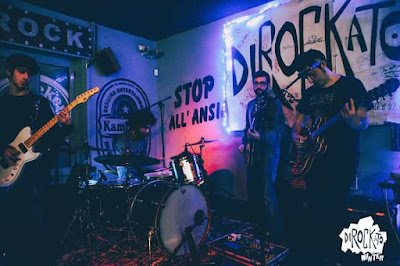 
Q. When did Keepers At Noon begin? Tell us about the history...
(Paolo) I started recording demos a couple of years ago, just for fun. The idea was to publish one song every week on Soundcloud, but after the first demo a very small label from Austin, Texas contacted me and offered support for releasing my stuff on music cassettes, so I thought there was a potential to the songs and I decided to start a real band, and here we are. Later the label decided not to produce the cassettes anymore so the single is our very first record.

Q: Who are your influences?
(Paolo) I like melodic bands with an edge to their sound, like The Jesus And Mary Chain or My Bloody Valentine and all those British bands from the ‘80s and the ‘90s that were influenced by the ‘60s. I love the Smiths and almost everything by Sarah Records. Adriano and Fabrizio had previously played in a post-rock band which shifted towards more of an electro-math sound, and felt that they wanted to go back to a more traditional sound, and this was the right project to do so.

Q. How do you feel playing live?
(Adriano) Playing live is always exhilarating and it's nice to see the audience respond positively to your music.

Q. How do you describe Keeper At Noon´s sounds?
(Adriano) It's hard to say, when arranging our songs we sort of take inspiration from a wide variety of bands spanning a few decades, but basically, apart from a tendency to avoid using modern electronic sounds, anything goes

Q: Tell us about the process of recording the songs ?
(Adriano) We decided to record and mix the single ourselves, as our bass player had some recording experience and we figured that it would be cheaper and, most of all, easier to achieve what we were looking for, without the constraint of time and money. We did ask a few friends for a few microphones and other equipment, but we mostly recorded everything with stuff we already had in our rehearsal space, which is little more than a shed. This meant that recording right in the middle of the Italian summer was total torture, haha, but we feel that the result is worth our sweaty efforts! Also because we did take our time, we didn't rush things through and had the opportunity to rethink and re-record stuff when we felt it was necessary.

Q: Which band would you love to made a cover version of?
(Paolo) I’d love to cover New Order songs and fill them with jangly guitar sounds.

Q: What are your plans for the future?
(Adriano) Well, the single is of course just a taster, we decided to focus on fewer songs just so that we could have something to show around. Hopefully we'll get a record label to support us and then our next step will be to record a full length album. In the meantime we'd like to play as many gigs as possible and showcase our music, hoping to build up a fanbase and achieve some recognition maybe.

Q: Any parting words?
(Adriano) We'd like to thank Renato for contacting us and showing interest in our music, and the blog's readers, hoping they like our tunes. We can't wait to show you more!
*
*
*
Thanks