Forma with Boar God - An Interview 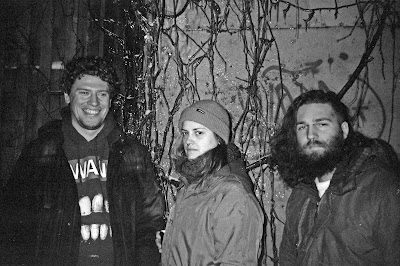 Q. When did Boar God begin? Tell us about the history...
A: (Eric: guitarist and singer) The band as a performing and recording entity started more or less around 2016, but I came up with the name and idea around 2009-2010, I don’t quite remember. It stayed in my head for a while as I didn’t really know how to write songs, but then I started experimenting with different guitar tunings and that’s what really kicked the whole thing off. I recorded some demos with the help of a friend and after a VERY long time of playing with various people Sabrina (on bass) and Rene-Olivier (on drums) came aboard, and now here we are!

Q: Who are your influences?
A: A huge influence early on was Killing Joke, but most of our influences are from the noisier/darker bands of the post-punk era: Swans, Sonic Youth, Husker Du, Comsat Angels, the Chameleons, the Banshees, Red Lorry Yellow Lorry, Live Skull,, Band of Susans, Feedtime…. But there’s also a lot of influence from shoegaze bands like Slowdive and Bailterspace, and even stuff outside of that like Unwound, Discharge and Big Black. We like to take bits and pieces from everything right now.

Q. How do you feel playing live?
A: Pretty good. We’ve become much more confident with our live shows and we are having fun with the visual aspects as well (projections, props, .etc.)

Q. How do you describe Boar God´s sounds?
A: Drone-Punk with ambient elements. Like a big beast chasing you down in the woods that occasionally stops to catch its breath.

Q: Tell us about the process of recording the songs ?
A: A close friend of mine named Shane Watt has a recording studio right below our practice space where he’s recorded a lot of great albums for other bands, so it was kind of a no-brainer to ask him. He understood our influences right away and had ideasof how the album should sound that were pretty much exactly what we had in mind. Overall it was really fun and a good learning experience, considering it was all the member’s first time recording a real album.

Q. Which new bands do you recommend?
A: There’s a band that we have played with quite a bit called Nuage Flou, who also just released their first album and it is amazing (noisy post-punk). Granted there is no shortage of great bands in Montreal: Body Break, Beep Test, New Vogue, Traces, City Gates, Blood Skin Atopic. Our drummer Rene-Olivier also plays in a folksy gypsy swing band called Scrap Matou who are also well worth checking out.

Q: Which band would you love to made a cover version of?
A: Comsat Angels, but after we finish writing more songs

Q: What are your plans for the future?
A: Write more songs and do some more recording. Also we want to press the album on vinyl or on CD at some point, but that process is quite expensive for us at the moment. We are planning on doing our first tour sometime in the spring/early summer so stay tuned.