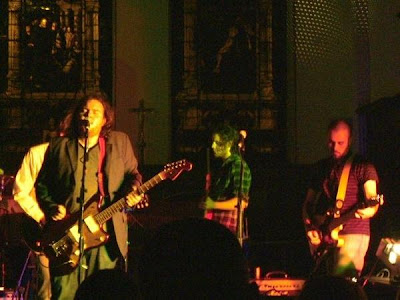 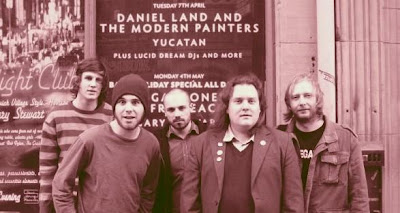 Q. When did Daniel Land & The Modern Painters form, tell us about the beginning.
A. The band really began back at the end of 2001 when I met Graeme. I was in Manchester, studying English Literature at Manchester University, and I was just starting to write my own songs. But couldn't find anybody who was into the same music as me. And I eventually found Graeme in a Hard House club on my 21st birthday! It was a totally bizarre situation. Everyone else was on ecstasy, dancing on the bar and on the stairs, and Graeme and I were sat in the corner talking about Radiohead and Spiritualized and how much we wanted to form a band together. It was a good beginning.

We ended up sharing a house together, and it was while we were living there that we met Oisin, who was the third person to join. We did a few things over the years and kept in touch and swapped ideas back and forth and eventually got it all together in 2007, when Andy and Jason came along – just after we’d recorded “Voss”, and just before we started playing live.

Q. What are the band's influences?
A. It's impossible to say really, there are five of us in the band and we all like different stuff. I guess like most musicians, we have pretty large music collections and wide ranges of stuff we're in to. We're not one of those shoegaze bands that only listen to other shoegaze bands or anything like that. In fact, none of us are really massive shoegaze fans, although I love the Cocteau Twins and Slowdive. My other musical loves are things like Brian Eno, Peter Gabriel, country music, and The Blue Nile. And Latin American music, strangely enough. I try to shoehorn those obsessions into our music. And of course, everyone in the band does the same thing with their tastes. 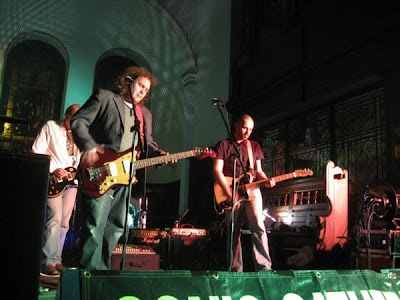 Q. Tell us about the recording process for the EPs?
A. We’ve generally recorded the EPs and the album in my house, which has a little makeshift studio. It's basic and we don't have very much expensive equipment, but the advantage we have is Time. We don't have to pay studio costs, so we record when we're feeling inspired, not when the clock is ticking. It's a very pleasant and un-pressured process. The recording room is very sunny and light and it looks out onto a church and graveyard.

Q. For a lot of people the debut Love Songs for Chemical Generation was the best dream pop album from the last year, what's your opinion?
A. That's a lovely thing for us to hear. I can’t speak for the other guys, but it overwhelms me that people think that way. Sometimes what I'm singing about it so bizarre and so private that I think nobody will relate to it. So it's amazing when people say they are moved by it. It makes it all worthwhile.

Q, Tell us about playing live. How did last years gigs go?
A. Our gigs generally go very well. It’s a tough time for touring musicians at the moment; some times lots of people turn up and you play to a full house, other times it's really quiet and you play to hardly any people, and there's no way of telling how it's going to go until the doors open. We generally do pretty well though. Our album launch in Manchester was one of the best. It felt like everyone we'd ever met in Manchester was there.

Q. What do you think about the classic shoegaze era?
A. We like some of it, but not all of it. Personally, I appreciate Slowdive for the sheer quality of Neil Halstead's songwriting. Neil's one of my most treasured and respected artists. I also like My Bloody Valentine although I'm not passionate about them, and bits of Chapterhouse. But in terms of the old scene as a whole, I have mixed feelings about it, really. I wasn't there the first time around, so I don't have any of my youth invested in it. There's no nostalgia there to cast a warm glow over it. I mean, when I started properly listening to older shoegaze music it was 2007 and I was 26 years old, so 1991 was already a long time ago. Looking back now it seems that the whole scene was a bit of a myth - none of the bands really had as much in common with each other as the press liked to make out. You listen to Slowdive and Swervedriver now and they seem miles apart artistically, but at the time the press wrote about them they seemed similar. It's interesting. But I think a lot of modern bands are exploiting those ideas in a better way. 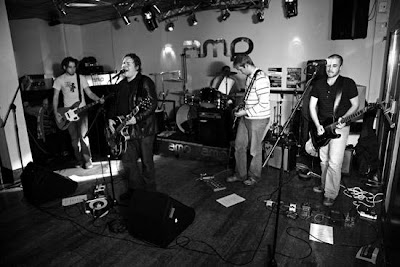 Q. Tell us about bands in the current shoegaze scene.which new bands you recommended?
A. We don't listen to a huge amount of shoegazey stuff to be honest. But the ones we do listen to tends to be those bands that are doing something interesting or unique with shoegaze really, ones that take the shoegaze sound and do something of their own with it. Erm, for me, off the top of my head I can think of Auburn Lull, Mahogany, Elika and so on. Exit Calm as well. And Serena Maneesh; I've just their new album, and I think it's one of the best in the genre.

Q. Which songs by other bands would you like to do cover versions of?
A. We play quite a lot of cover versions when we do rehearsals, and occasionally slip them into live performances, especially when we get asked to do an acoustic set. Just recently Oisin and I did an acoustic/ambient set in Devon where we did a really nice cover version of the Red House Painters song "Mistress", which I'd like to record one day. We like to take a track that's quite unfashionable and do it in our own style - in the past we've done covers of U2's "Running To Stand Still" and Deacon Blue's "Orphans", and we have some demo recordings of those which we might do something with one day. I like the idea of making a whole covers album of deeply unfashionable music; I think it would be an interesting thing to do.


Q. Tell us about your new ambient project riverrun?
A. The riverrun album is a series of ambient recordings that I have been working for nearly fifteen years. It was a series of little ambient sketches which were just little ideas created as part of the normal process of writing a song - I'd be fiddling about with something on the guitar or with some effects, and I'd go, "Oooh, that sounds nice, I wonder what I can do with that?" And I'd play for a while and realise it didn't fit with the song, but I saved it to my computer as a little piece of music in its own right. Last year, I had the idea of using some of these sketches as film music, and I started experimenting with all of those little sketches, blending them together and laying them on top of each other by changing the speed of things and slowing things down so that all the keys and tones matched. It turned into a kind of patchwork; the whole thing flows together from start to finish and makes a really deep, environmental, ambient mood. And it makes a very nice album, I think; one of our fans wrote to me and said it was a 4am record, which is the perfect compliment, because that's how I always saw it.

(You can hear riverrun at the Myspace page www.myspace.com/riverrun-danielland) 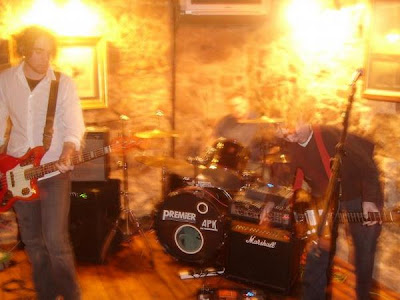 Q. About the news for Engineers, you have just joined the band as a bass player and Ulrich Schnauss has also joined Engineers as a keyboard player, tell us about this new supergroup....
A. Hahaha, supergroup! That’s very kind of you to say that, I’m not sure how accurate it is though!

Well, I’ve known Ulrich for a few years, since 2007 or so. He really helped us at the start of our career, when “Voss” came out, and he was responsible for our connection to Sonic Cathedral. Aside from that though, he’s a really genuine guy, and fun to be around, and we did talk about working on something together in the future, along with Mark Peters from Engineers, who had mixed two tracks of ours with Ulrich for a 7” single on Sonic Cathedral records.

The original Engineers line-up folded last autumn, and early this year Mark approached me to ask if I could join and play bass for a while; Ulrich was already playing keyboards in the live band of Engineers anyway, so it seemed a nice way of doing what we’d planned to do anyway, which was work together.

It’s really lovely to be involved. Aside from it being a lot of fun, it’s also quite useful for myself and The Modern Painters in terms of industry connections and things like that. Engineers have been signed for a long time, so they know lots of people. That’s not the only motivation for getting involved, of course, but it’s a bonus. Easy for me; all I have to do is play bass. It’s nice to not be the frontman.

Q. What are the plans for the future? New album...?
A. We’ve just been starting to think about the second Daniel Land & The Modern Painters record, actually. I think is going to be a really interesting, rewarding record to make. We all loved the last Radiohead album, which has been a pretty constant obsession, and I was listening to that and talking with our bass player Andrew about ways in which we might bring to the fore the unique elements we have as a band - how we can emphasise the things we do that others don't and maybe strike out a bit more on our own path for the second album.

Personally, I’ve been thinking a lot about lyrics recently. I’m keen on bringing the lyrics right up front on the next record, and I really want to use the lyrics to communicate rather than just hiding them and singing about obscure things. I'm going to be thirty this year, and most of the songs on the last record were written during a long relationship that ended last year. I've really been doing a lot of work on myself since then, my values and priorities have changed a lot, and I've got all these exciting new things to write about.

In fact, I've written most of the lyrics for the new album already; they're finished. Which is something I've never done before - the lyrics were always done at the end, and were sometimes a bit rushed. So this is a whole new way of working for me, and is very exciting. I can’t wait to hear what we all come up with for this record.
*
*
*
Thanks Daniel!!!
http://www.myspace.com/danielland