Cut The Cake by The Wolfhounds - An Interview 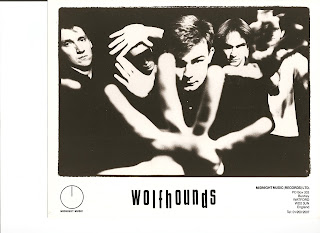 Q. When did you begin to get interested in music?
There was no sudden interest. My dad had very few records, but I still like them now: Marty Robbins, Jerry Lee Lewis, Lonnie Donegan; my mum had Frank Sinatra and Nat King Cole – I like them, too. A real influenfce early on was a huge pile of discarded 45s that we found by the dustbin when we moved into our family house in 1972 (I was 8) – instant record collection! In the stack was Johnny Kidd’s Shakin’ All Over (still one of the best records ever made, in my opinion), Julie London, Fats Domino, Jackie Wilson, She’s Mine by Conway Twitty, some Charlie Rich – I still have a lot of them.

Crucial to my emotional connection with music and determination to play and write songs was a WH Smith record voucher I got for Christmas at the end of 1976 (I exchanged it for Dr Feelgood’s Stupidity, Who’s Next by The Who and Sgt Pepper) and seeing the Sex Pistols on London Weekend Television just before that. I didn’t understand the music which seemed like noise at the time, but the positive aggression of the performances made my 12-year-old brain reel and I had to walk round the block a few times after seeing it, knowing that I had to do something …

The plethora of independent records coming out between 1977 and 1982 kept at a fever pitch of excitement throughout my teens – so many possibilities between pop and experiment all squeezed into a 3-minute 7” single, and at their peak there were dozens coming out every week – I’m still catching up now … 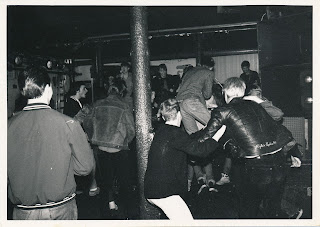 Q. When did the Wolfhounds start? Tell us a story …
Wolfhounds started as The Changelings, kind of a side project of the Purple Hearts in which their guitarist and singer wanted to play drums and guitar respectively, to play 1960s punk/garage. Me, Paul Clark and a fellow named Mike Edmondstone were known as Nuggets fans on the local scene and joined in. The originally mooted singer was too shy to sing so after 2 rehearsals I started to yell lyrics (I fancied myself as some kind of poet at the time) just so we could move forward. We covered Love, 13th Floor Elevators, Seeds, Standells, all the usuals …

I had a couple of bands before that: a school punk band called Avarice, again with Paul Clark (future Wolfhounds guitarist), while we were about 14-15, a more kind of Messthetics-type band called 22,000 Flowers (Age now 16-17) who put out a little cassette, and a pre-Wolfhounds band called Nasal Spray and the Wolfhounds with some older friends (kind of a Subway Sect/Spiral Scratch punk band). I also put out a post-punk-type fanzine and corresponded with some other fanzine writers. By the time I was 18, Wolfhounds was supporting bands like The Playn Jayn and Chelsea at various London dives, feeling well out of place. We felt such a relief when somewhat cooler bands like June Brides and That Petrol Emotion started putting us on as well. 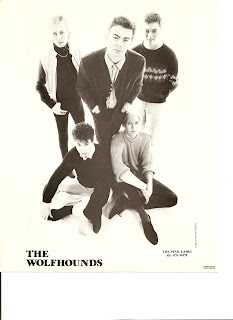 Q. What are your influences?
I’m influenced by things I don’t like as much as things I do - they provide motivation.I have gradually accumulated thousands of records, CDs and MP3s. In film, literature, and music, I‘m a genre buff. I like film noir and sci-fi, crime novels and old travel books, and in music I like 70s punk and reggae, 60s garage, 80s hiphop, 50s exotica, post-punk (both the poppy and arty side) and rockabilly. I like anything that goes a bit strange or weird, that pushes against its boundaries, self-imposed or otherwise.

Wolfhounds started with the idea that you could write proper pop tunes with both noise and oddness in them, following bands like Wire and Josef K, and even things like the Beatles and various psychedelic outfits - I still prefer the term ‘noise pop’ rather than ‘C86’ or ‘indie’.

Q. What represented the Class of 86 for you?
As far as our own little contemporaries went, Bogshed were the best – great guitar and lyrics - but I also liked the Pastels, June Brides, Dog Faced Hermans, The Loft and a few others. I have great memories of several Sonic Youth shows and a couple of Nick Cave performances, and hearing the first sample-based hip hop records, like LL Cool J, Public Enemy, Schoolly D and Eric B & Rakim. 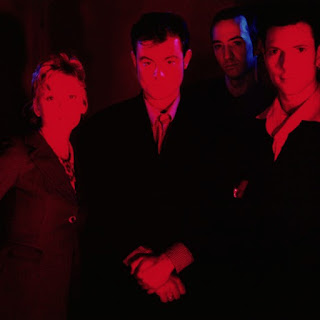 Q. How were the shows at that time?
I found the smoky, boozy packed clubs full of hormone-addled adolescents dancing and spilling over on to the stage, buzzing about music and striving to just do something, very exciting, being a hormone-addled adolescent myself. There were fights, parties, ill-advised sex, relationships, liaisons and friendships, tears and delirious laughter. The early indie scene was as sex- and drug-oriented as any other youth movements/scenes, and not the very fey scene which people think it was nowadays. As far as modern genre-specific ‘indie’ and alternative music goes, I think it stinks. But I might not if I was 20, I guess.

Q. When and how did Moonshake form? What was the concept of the band?
That was my early predilection for PiL, Gang of Four and The Slits coming out, via a self-education in music like Can, Miles Davis, Kraftwerk and Lee Perry, as well as taking on board the influence of hiphop and the American noisy post-hardcore bands.

We had already been assimilating some of this in the Wolfhounds’ music latterly, and on our break-up I decided that I needed a very rhythmic base and a less laddish feel, hence asking Margaret to join. She actually came to a Wolfhounds show after I had tentatively asked her to consider joining them, and I rang her up to say I was fed up with pure guitar music and wanted to work with samples, despite having no sampler. I did manage to get a development deal with Creation, which helped. The original concept of Moonshake was ‘Metal Box meets the Byrds with samples’. Our voices never did go together very well, but other things worked so …


Q. What are your favourite Wolfhounds and Moonshake records?
The best Wolfhounds records are Cut The Cake (except Deadthink, which is shit) and the Blown Away mini-LP. Big Good Angel is the best Moonshake record, probably the purest distillation of the original concept.

Q. Tell us about your projects after the end of Moonshake?
Afterwards, I put together The $urp!u$ with a German woman called Anja Buechele and we did a few London shows and a New York gig, ran a club in Shoreditch, and recorded some demos but it didn’t quite work. I‘m doing several of the songs with Wolfhounds now and they work a lot better with a whole well-honed band.

Q. The Wolfhounds are active again - what is the motive for the return?
Fun. However, unfortunately, I’m one of those people who can’t have fun for long without turning it into a bit of a song and dance, and I write as a reflex reaction to life so it’s good to have somewhere to direct my efforts. And I’m still having fun, having both nothing and everything to prove at the same time … 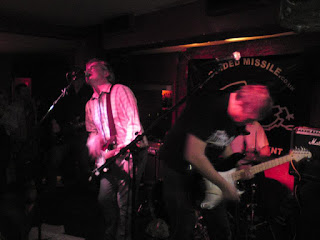 Q. What are your plans for the future?
We seem to be putting out a single every 6 months or so, and once we’ve done about 5, we’ll probably compile them into an LP. We’re also talking to a few people about reissuing our historical stuff, though we’re still trying to track down the odd missing master! We have so much new material in various stages, it’s sort of daunting, but samples will be coming in again – I‘ve still not heard them used much in a raw pop context. Odd tunings are raising their heads again too. There’s another potential genre, right there, by the way: ‘raw pop’.
*
*
*
Thanks Dave