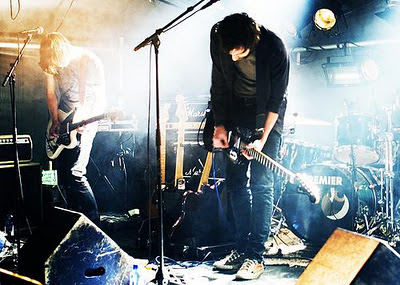 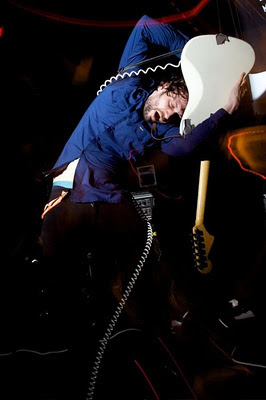 Q. When did Megaphonic Thrift e starts, tell us about the history...
A. Richard formed The Megaphonic Thrift after his former band, Stereo21, came to an end. He first asked Feddi, singer and guitarist from Casiokids, to play the drums, and later keyboardist and singer Linn joined on bass. The idea was to get a rawer expression, by combining people with different musical backgrounds and have them play instruments they normally didn't. When we needed someone to be on the more stabil side of guitar playing (in contrast to Richards madness), we asked Njål to join to fulfill our soundscape.
Q: Who are your influences?
A. We get influenced by movies, books, food, art, people, cities and music. Its especially inspiring to lissten to our friends making music. We often work together with different people - helping eachother out in the studio and stuff - and when other people make such great music, it kind of drives you to wanna go do it too.

Q. Made a list of 5 albuns of all time…
My Bloody Valentine - Loveless
Motorpsycho - little lucid moments
Spiritualized- Ladies and gentlemen we are floating in space
Beck - sea change
Tortoise - tnt
Q. How do you fell playing alive?
A. Playing live is a great kick for us. Its the best thing we do. We are known for beeing facemelting and blowing people's heads off. In a good way off course! We love sound, and want to bring as much of it as we can out to the audience. We really like to record music, and play with crazy ideas in the studio, but it is while playing live we truly have the total control ourselves. The lisstener don't get to choose the volume, the order of the songs - and the songs differ and develop every time we play them live.
Q. How do you describe Megaphonic Thrift sounds?
A. Loud, noisy, melodic, intense, psychedelic, rhythmic, strange.
Q: Tell us about the process of recording the new album?
A. We actually made all the songs on the new album together. On our first album, Decay Decoy, Richard did most of the song writing. This time it just became naturally for us to make it all together by jamming. Thats kind of the reason why we decided to just call the album The Megaphonic Thrift. Cause it's 100% us as a band.
Q. What´s represents the shoegazer classic era to the band?
A. We wouldn't really describe ourselves as a shoegaze band, but we use some elements in our music. For us I guess the most important influences in the shoegaze music is bands like My bloody valentine and off course Spacemen 3 and Spiritualized. With Loveless, MBV revolutionized music. And the way Jason Pierce has made such great music by making songs so simple and minimalistic - yet so powerful and unique - is admirable and inspiring.
Q. Which new bands do you recommended?
A. Would like to recommend some bands from our home city Bergen, Nowray:
Check out Hypertext, Lovecult, Syntax TerrOrkester, Young Dreams and Electric Eye. 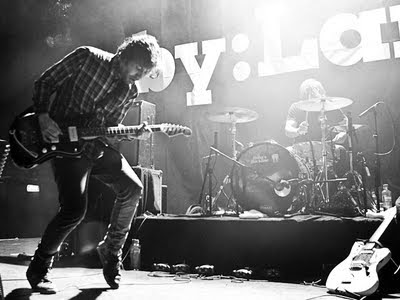 Q: Which bands you love to made a cover version?
A. We actually never played any cover songs this far. Would love to noise up some good old Neil Young songs.
Q: What´s the plans for future....
A. 2012 is all about our new album. Touring as much as we can, play as many festivals as possible and spread good music to people. We also hope to get the chance to go to Japan next fall.
Q: Any parting words?
A. Check out our new album! Released worldwide the 11th of februray.
*
*
*
Thanks Megaphonic Thrift!!!
https://www.facebook.com/megaphonicthrift
http://www.myspace.com/megaphonicthrift
Postado por TBTCI às 04:43