All The Hours Are One with Corasandel - An Interview 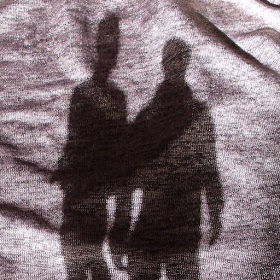 
Q. When did Corasandel begin? Tell us about the history...
Jimmy – Mark and I kept meeting through friends of friends of friends here and there and slowly got pulled into each other’s orbits, like delayed-asteroids. Then we started making each other mix cd’s and playlists until Mark found out that I had an electric guitar in my wardrobe…he was in other bands at that point, whereas I’d never played outside my living room, but we met up and in the first five minutes after we plugged in a song came. We started meeting once every couple of months and then it became every month and then every couple of weeks until it’s often twice a week now.

Q: Who are your influences?
Jimmy – I’m a massive fan of Liverpudlian band Shack, they’re not remotely shoegaze, but their way with melody is incredible and each album evolves from the last one. Hayley (Bonar) is great, her Impossible Dream album was played to death in our house and I’ve been listening a lot to her over the past few years. She touches on shoegaze on a few tracks, and I really admire her fearless exploration of sounds and ability to roll them up into a cracking tune and do it her way. I go back again and again to Stella Luna’s Stargazer EP, it’s mad that it’s all they left. I remember first hearing it and thinking how huge it sounded and getting utterly lost in it, it still feels really pure to me.

Mark – I’m pretty much obsessed with hundreds of artists, all of whom I take ideas from. Early 90s American rock like Sebadoh, Belly, Madder Rose and Mercury Rev were important influences when I was younger. More recently I’m listening a lot to artists like This is the Kit, Soccer Mommy and Sunflower Bean. I love Hayley Bonar (more than Jimmy!). I love lots of Brazilian music too, especially Caetano Veloso and Marisa Monte.

Q. Make a list of 5 albums of all time…
Jimmy (not in any order, just can’t do that)
Brian Eno – Apollo
The Verve – She’s a Superstar EP
Shack - Waterpistol
Doves – Lost Souls
Slowdive – Slowdive. As much as I love their classic albums, I’ll go with the new album. For a long time after buying it I’d wake up in the morning and be excited to get to listen to it again.

Q. How do you feel playing live?
Jimmy – Whenever we play live I see colours, so rather than ‘feel’ I’d say it’s more red, yellow and purple. The orange gigs are the ones you have to watch out for though, they’re always tricky.

Mark – It’s a lot of fun playing live, but like all important endeavours it’s fraught with anguish and danger. It takes a lot out of you emotionally and I don’t like to be over-prepared when I play otherwise I just feel like a performing robot – I try to keep the element of surprise (for me and the audience), there’s an element of risk though with doing it that way... it’s like walking a tightrope! All the best bands do it that way though.

Q. How do you describe Corasandel´s sounds?
‘Ethereal-ambient-folk-tinged-dreamy-shoegaze-experimental-postrock’ are some of the ways our music’s been described over the last eighteen months, so we’ll go with that catchy little description J.

Q: Tell us about the process of recording the songs?
One of us has an idea and brings it to our weekly rehearsal way out in the Lincolnshire countryside, and then we jam and jam late into the night until things start to take shape. Sometimes one of us has a more realised song, sometimes just a few chords, sometimes just a sound, sometimes nothing. The jams help because we tend to hit on something after a couple of hours of playing, some little change can then send us off down a different path, a different pedal being kicked on, a mistake that sounds interesting or somebody coming out of the verse too early, but it makes it more dynamic. It’s about being there together as a band and being ready for when those changes happen.

Q: Which band would you love to make a cover version of?
Mark - There’s a couple of tunes Ive been wanting to fuse together, one by Pink Floyd tune and one by the mighty Yo la Tengo. They’re completely different but it works in my head, I wonder if I’ll ever work it out!

Q: What are your plans for the future?
Our debut EP ‘All The Hours Are One’ is released on 26 April on Bandcamp – it’s a really exciting time for the band (https://corasandel.bandcamp.com/album/all-the-hours-are-one) . We’ve been working towards this for the last eighteen months. We’ll be following it up later in the year with either a single or another EP. There are a lot of songs in the bank for us to play with.

Q: Any parting words?
Jimmy – Do you know what the best thing about all this is? Every week I go to a barn at a farm that we hire out for the night to rehearse in. It’s off-grid in the wilds of Lincolnshire and everything else is left behind. There’s no one else about, just two guitars and my friend. What I love the most is that moment just after we’ve plugged into the amps: there’s a pause and then one of us goes “I’ve got this idea…” and we play.

Mark – We need to be kinder to this planet. We have to take the warnings from Scientists over Climate Change (Climate Chaos) more seriously than ever. Grassroots movements like Extinction Rebellion are very important as governments and big business don’t seem to be prepared to act now, the hour is getting very late. I want future generations to enjoy this planet as much as I have – art must reflect what’s going on.
*
*
*
Thanks