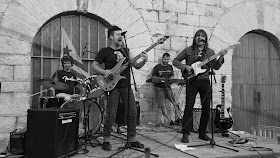 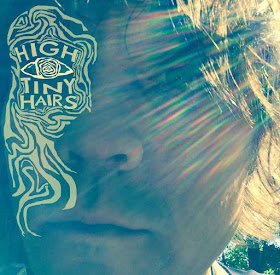 Q. When did High Tiny Hairs start? Tell us about the history...
High Tiny Hairs started in Minneapolis about a year ago. I was already in a couple of bands at the time but needed another outlet. It was during the winter when the project began so rather than freeze my ass off I spent my time in my studio at home. Before I knew it I had a whole slew of songs. Only problem was I didn’t have a band. Luckily some good friends helped me play out. We played a couple of shows but then I moved to Spain having met my girlfriend. I’d been playing with Fuck Knights off and on so we had been playing Spain a lot. I instantly fell in love the first time there. Now I live in a small city called MontBlanc where I met the new members of HIgh TIny Hairs.

Q: Who are your influences?
Ayeee!! Thats gonna be hard but I’ll try Brian Eno, Syd Barrett, Alex Chilton, Animals, The Saints, The Monks, Johnny Thunders, The Kinks, The Modern Lovers, The Sonics, Can, The Zombies, David Bowie. The Damned, Vasilines,  The Troggs, The Specials.

Q. Make a list of 5 albuns of all time…
Odessey and Oracle---- The Zombies
Preservation Society - The Kinks
Man who sold the world- David Bowie
Neat Neat Neat - The Damned
L.A.M.F -The Heartbreakers

Q. How do you feel playing live?
I feel pretty good. I’ve never ever gotten nervous. The only thing I care about is having a good time and that the peeps are having a goodtime. I love playing for new faces as well the old faces.

Q: Tell us about the process of recording the songs ?
With the last album I started with making demos. Then go to the next phase and record the album.
I played on most of the last album Drums, Bass,Guitar, Farfisa and vox. However on a couple of songs had some friends play Bass and Drums on a couple of the songs. Thanks Joe Holland and Chris Hepola!

Q: Which band would you love to made a cover version of?
Maybe something David Bowie or Brian Eno or something from Syd Barrett.

Q: What are your plans for the future?
We’ll we ‘d love to do some touring in Europe and US. Our main goals to keep recording albums and having fun.

Q: Any parting words?
We’ve got a new album coming out in late November! Along with a small tour in Spain.
Thanks !!
*
*
*
Thanks