Sweetheart with Veda - An Interview 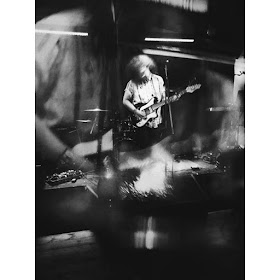 
Q. When did Veda begin? Tell us about the history...
VEDA began in 2016. Before then I was in a lot of different bands and never satisfied with the creative outcome. So I decided to do things myself and start writing and producing songs in my bedroom, these songs then became my first EP ‘Soir’. After a good reception online, I got some of my old school friends together and started playing live, the rest is history!

Q: Who are your influences?
I don’t have any direct musical influences, I’m not trying to emulate a certain band or artist. I’m inspired by scenes and aesthetics. I really love what Spirit Goth is doing, they’re an indie label based in Brooklyn. They put out really cool lofi/bedroom music and are home to some dope artists such as Castlebeat, Vansire and Terry vs Tori. I’m really lucky to be putting out my next EP Sweetheart on tape through their Cassette Club in April.

Q. Make a list of 5 albums of all time…
I feel like this question is impossible to answer as theres so much music I haven’t listened to yet for me to give a genuine response haha.

So I’ll change to question slightly to 5 albums I’m really into at the moment, no particular order!

Q. How do you feel playing live?
For me playing live is the reward for spending months recording new music. I get to see how the songs grow and evolve in a live situation. The line up of the live band is always changing, so it keeps things fresh and exciting. I also love travelling to new cities and countries, making new friends and experiencing different cultures.

Q. How do you describe Veda´s sounds?
My sound is constantly evolving, I like to think we’re living in an age of post-genre. Genre boundaries seem to be less defined nowadays. You can get away with picking and choosing elements from different styles of music, which is great and keeps things fresh. I think if I had to come up with a blanket term to describe my music overall, it would be lo-fi. I love lo-fi music, to me the aesthetic is authentic and honest. Studio limitations make you experiment and think outside the box, imperfections to me are perfections.

Q: Tell us about the process of recording the songs ?
The recording process is very simple. This is because I don’t have a lot of gear to work with, so its a necessity. I use a laptop, an audio interface, a few keyboards and guitars, and I record everything directly in. I don’t use studios or hire engineers, I record, mix and master everything myself.

Q. Which new bands do you recommend?
At the moment I’m preparing for some shows in France next week. My friend Justine, who’s a photographer in Paris, made a playlist with some French bands/artists for me in get into some French vibes. Really into an artist called Lescop, really nice synth- pop and I’m loving another band called Grand Blanc.

Q: Which band would you love to made a cover version of?
The song would have to be one thats completely the opposite style to what i do. My favourite covers are when an artist takes a song and moulds it into something that sounds different to the original track. I’ve just finished watching the new Motley Crue film ‘The Dirt’ on Netflix, so maybe it would have to be a Motley Crue song. Could you imagine the Crue but bedroom- pop?

Q: What are your plans for the future?
I’ve spend the last 2 years touring and playing live, perfecting my live performance and building an audience. I’ve also recorded a lot of new material and developed my sound/song writing. So this year I’m going to be focusing on putting music out there. It’s hard sometimes trying to make solid plans in the music biz as everything is always uncertain, but I try not to think about things too much and just go with it, see where life takes me!

Q: Any parting words?
My new EP Sweetheart drops on the 1st of April via Birthdiy, pre-order it on band camp for only $1 here - https://vedawave.bandcamp.com/album/bdiy-009-sweetheart
*
*
*
Thanks