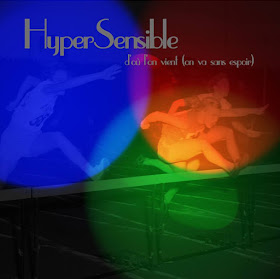 
Q. When did HyperSensible begin? Tell us about the history...
We became this project in september 2017, d’où l’on vient (on va sans espoir) is our second album.
Cyrille and me, we know each other since adolescence. We played in high school bands. Then we
learned from sight and he and I, we has developped our own projects, me in Toulouse and Cyrille in
Paris. I have formed International Hyper Rythmique for almost 10 years and Cyrille played with
several formations (Tadash, Red Space Cyrod, Oizak)

Q: Who are your influences?
When we decided to replay together, the first requirement was to sing in French. I had just seen a
movie, B-Movie : Lust & Sound in West-Berlin, about the music bands in Berlin in the 80’s with a lot of ColdWave music. The original soundtrack is excellent. I wanted to do something like that. So I think about Taxi Girl, Lescop, Joy Division, but also Fugazi, Interpol… are probably references.

And all the albums with one note songs ! Only one note !!

Q. How do you feel playing live?
We don’t playing live. Cyrille doesn’t want. I think it’s sad but « c’est la vie », maybe one of this days…

Q. How do you describe HyperSensible´ sounds?
Romantic and nude.


Q: Tell us about the process of recording the songs ?
We don’t live in same town so we played at home. Usually Cyrille send me bass and drums, I play guitars and keyboards, I send him back, he writes the lyrics, sings and sometimes plays guitar. And
the song is ok. On the last album I propose some complete title and Cyrille sings and add a guitar
part. It’s pretty equal.

Q: Which band would you love to made a cover version of?
A nice melody but very far from our music. Astrud Gilberto ?

Q: What are your plans for the future?
Do other albums, and work our sound to find our own. Maybe playing live ? And learn how to make sushis.

Q: Any parting words?
Believe in the future, Do it yourself, Take Care and Love.
*
*
*
Thanks