Caught Up On You with Foundlings - An Interview 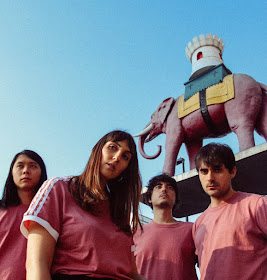 
Q. When did Foundlings begin? Tell us about the history...
Foundlings began in late 2017 when we all met up for the first time as four in Brixton Hill Studios. We played our first gig at Band On The Wall, Manchester in January 2018 and since then we've played all over the country, released three singles, an EP (released via Scottish label Last Night From Glasgow), had a fair bit of support from BBC Introducing, 6 Music and we're in the process of writing our debut album.

Q. Who are your influences?
I think one of the things that makes us stand out is the fact we have fairly diverse influences. There's definitely a lot of 80s/90s Indie in there, but we're in to all sorts of stuff - shoegaze, 60s folk revival, post-punk and some heavier stuff. Basically anything we like and that we deem to be 'good' music; there's nothing set in stone, which I think is a good thing.

Q. Make a list of 5 albuns of all time…
That's a tough one. This is in no particular order, and would probably all change tomorrow, but for me at this present moment in time it's:
The Beatles - White Album,
PJ Harvey - Let England Shake,
The Stone Roses - The Stone Roses,
Bob Dylan - Blood on the Tracks,
Neutral Milk Hotel - In An Aeroplane Over The Sea

Q. How do you feel playing live?
We spent 2018 playing (almost) as many live shows as we could, and all across the U.K. We did that not only because we wanted to get out there and start building a following, but also because there’s a lot to be said for practicing that element of being a band. I’d like to think that people can see how much we’re enjoying ourselves, and want to join in. I think we've got to a point where we feel really comfortable on stage as a live unit and they're always a lot of fun.

Q. Tell us about the process of recording the songs?
With our latest EP, we had more time in the studio, so we were able to be more creative and experiment with things like harmonies and guitar layers - most importantly we were afforded the freedom to have more fun in the studio this time around. Previously, we tended to go into the studio with everything written, but we built things up whilst we were working this time and the songs changed quite considerably from how they had been sounding live.

Q. Which new bands do you recommend?
We're really into Chrousgirl, Mammouth Penguins, L I P S and Chemtrails at the moment. All four definitely worth checking out!

Q. Which band would you love to made a cover version of?
The Soronprfbs

Q. What are your plans for the future?
We've got a few festivals in the UK planned for summer and gigs in London and Brighton, but we're also working on writing and recording our debut album, with a few releases in between. Keeping busy!